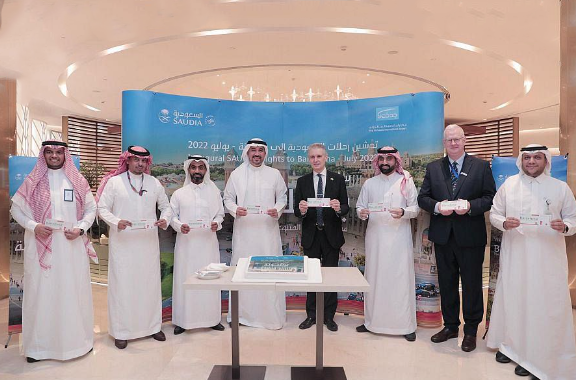 SAUDIA has announced the launch of direct flights connecting the Kingdom’s commercial center of Jeddah with the second most populous city in Spain; Barcelona in partnership with The Air Connectivity Programme. Guests within the Kingdom are warmly invited to travel to and from the coastal European destination, which boasts remarkable architecture, distinct Catalonian culture and cuisine as well as the Camp Nou Stadium, home to football giants FC Barcelona.

The flight from Jeddah to Barcelona took off on Saturday, July 2nd at 10:20 AM.  Preceding the flight, a celebratory event was held at King Abdulaziz International Airport in Al Fursan International Lounge and at the boarding gate for the new route. The event was attended by Mr. Essam Akhonbay, VP of Marketing and Product Management in SAUDIA, the Deputy Head of Mission of the Embassy of Spain in Saudi Arabia, Mr. Ricardo Mor Sola, as well as Mr. Rashed Alshammari the VP of Commercial and Mr. Sultan Otaify the VP of Strategy and Communication from the Air Connectivity Program to commemorate the inaugural flight route.

After the seasonal operations and starting on August 30th, the route will become a scheduled flight twice weekly in collaboration with the Air Connectivity Program.

The announcement of SAUDIA’s Barcelona route comes in line with a series of new international travel routes under the agreement with the Air Connectivity Program.  The program is aimed at further supporting the development of the Saudi Tourism Sector aligning with the Kingdom’s objectives of Vision 2030. In collaboration with the program, newly established flight routes between the Kingdom and Zurich have been established as well, along with two additional routes to be announced at a later date.

Mr. Essam Akhonbay, VP Marketing & Product Management stated that “This collaboration benefits SAUDIA’s strategic objective of bringing the world to the Kingdom of Saudi Arabia. The direct scheduled flights to and from Barcelona all year round will increase the tourism and business traffic between the two destinations”.

SAUDIA’s new route connecting Jeddah to Barcelona will further utilize the airline’s extensive fleet, catering to guests with a range of convenient check-in methods, high-quality onboard services, and a comfortable flight experience that underlines the flag carrier’s commitment to excellence.