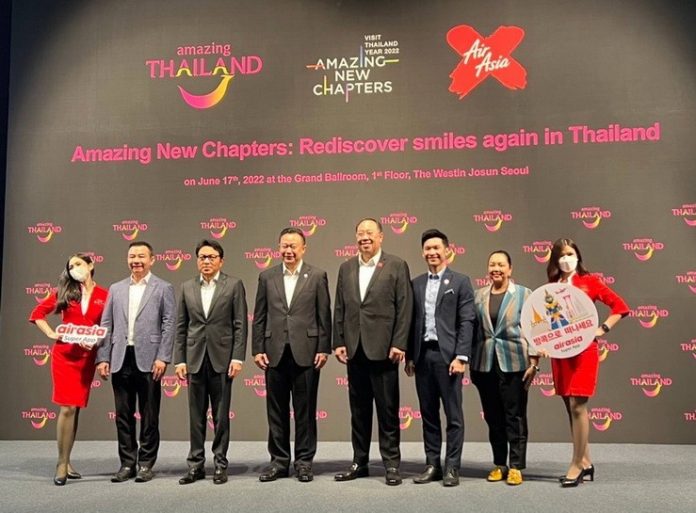 The Tourism Authority of Thailand (TAT) embarked on the first roadshow to South Korea in two years since the COVID-19 pandemic. The 15-17 June, 2022, roadshow included high-level TAT meetings with leading Korean operators, one-on-one business sessions between Thai and Korean tourism businesses, and a press conference.

Mr. Yuthasak Supasorn, TAT Governor, said “South Korea is one of Thailand’s major tourism markets in East Asia, having in 2019 produced 1.88 million tourists and 75,000 million Baht in tourism revenue. It is vital for us to rebuild this market and that is exactly what we are doing through activities such as this recent roadshow to Seoul. We hope to see half a million Koreans visit Thailand by the end of 2022, and as the market continues to recover, 1.3 million Korean visitors in 2023.”

The ‘Amazing Thailand Sales Connection to Korea 2022’ on 16 July was Thailand’s first business matching event held in Korea in two years. The event brought 15 Thai tourism businesses to one-on-one business sessions with 32 Korean travel agencies from Seoul and nearby. AirAsia X provided support for the event.

The ‘Amazing New Chapters: Rediscover Smiles Again in Thailand’ press conference on 17 July was attended by over 30 Korean media. They were updated on Thailand’s tourism situation and its plans for rebuilding the Korean market by Mr. Yuthasak. Meanwhile, Mr. Patima Jeerapaet, Chief Executive of Thai AirAsia X, also announced the airline’s plan to resume Incheon-Bangkok flights to help stimulate travel from South Korea to Thailand.

The ‘Amazing Thailand Amazing New Chapters’ dinner reception followed the press conference, as a way of saying thank you to the Korean media as well as tour operator alliances from South Korea and Thailand , altogether over 100 participants, for their continued support of TAT marketing operations. H.E. Mr. Witchu Vejjajiva, Ambassador of Thailand to the Republic of Korea, was also present at the gathering.

Prior to these trade events, an open forum to discuss ways to promote Thai tourism in the Korean market took place on 15 June. This saw Mr. Tanes Petsuwan, TAT Deputy Governor for International Marketing – Asia and South Pacific, and members of the TAT’s East Asia team and TAT Seoul Office meet with the CEOs of two major Korean operators – Mrs. Song Mi Sun of Hana Tour and Mr. Yu In Tae of Mode Tour.

Mr. Tanes said, “The 15 June, 2022, meetings were to build confidence in the South Korean market that Thailand was once again open for tourists, and to seek cooperation from the operators in sales promotions that would target the luxury, golf, incentive, and charter flight travel segments and stimulate South Korean winter tourist traffic to Bangkok, Chiang Mai, Chiang Rai, Hua Hin, and other secondary cities.”