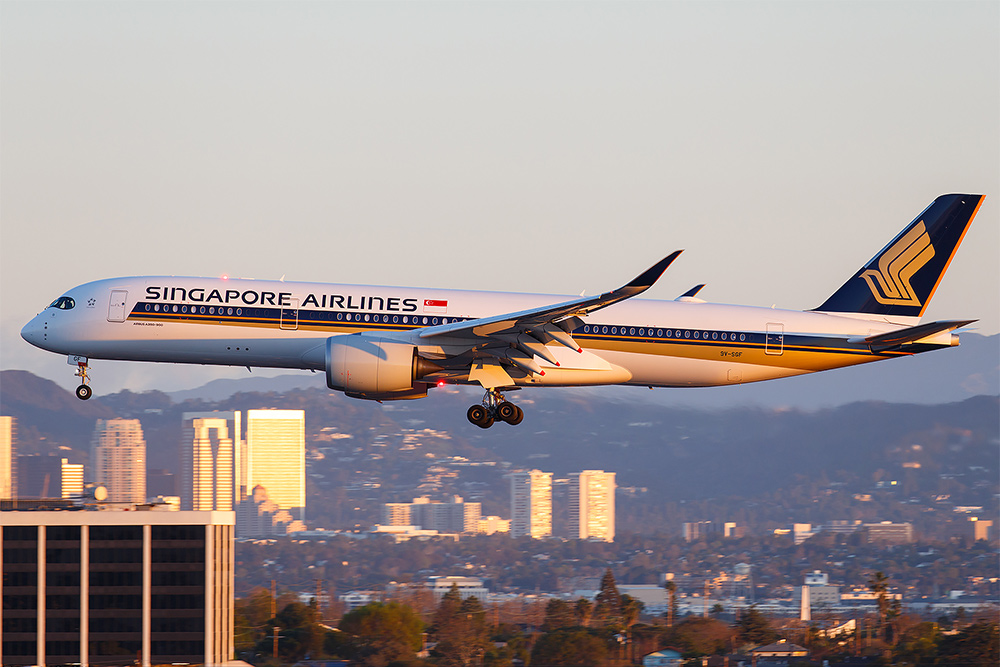 Singapore Airlines will operate non-stop to New York twice per day using Airbus A350 ULR aircraft from late March, in addition to an A380 via Frankfurt. (Photo: James Rowson)

Singapore Airlines will serve New York three times a day for the first time in its history, with non-stop A350 ULR flights to Newark making a comeback in March.

Singapore Airlines has revealed to Mainly Miles the long-awaited restart of its non-stop service to and from Newark Airport in New Jersey, with the 18 hour 25 minute flight operated by an Airbus A350 ULR returning to the network on 27th March 2022.

The good news is this reinstated link will run alongside non-stop A350 ULR services to and from New York’s JFK Airport, which were launched on 9th November 2020, and will also coincide with an upgrade of the daily New York JFK via Frankfurt route to the Airbus A380.

Here’s what SIA told us about its ‘big plans for the big apple’, as the airline approaches its 30th anniversary flying to New York later this year.

Singapore Airlines first launched flights to and from New York JFK Airport on 1st July 1992, with Boeing 747-400s operating six times weekly; three via Frankfurt and the other three via Brussels.

At the time SIA was the only airline in the world to serve the Far East from the USA via both the westbound (Pacific) and the eastbound (Atlantic) routes, with these New York flights complementing its existing West Coast flights to Singapore via Hong Kong, Japan and Taiwan.

n 2019, the airline’s last full year of operations from New York before COVID, it carried 163,686 passengers from the city (Source: Bureau of Transportation Statistics), but this new capacity hike from March 2022 will see SIA offer an equivalent of 289,445 annual departure seats from the city.

With a restart of Newark flights in March 2022, Singapore Airlines will have returned to all its pre-COVID U.S. passenger destinations, having also added year-round Vancouver flights during the pandemic and made a return to Seattle in the process.

The Newark restoration will also see Singapore Airlines reunite with Star Alliance partner United Airlines, which has a large hub at the New Jersey airport, enhancing connections for many travellers flying to and from other East Coast cities.

Late last year the two carriers signed a Memorandum of Understanding, which SIA said signalled “the start of a deeper partnership between both airlines, which could offer enhanced options and benefits for customers”.

While it seems a long time ago, it’s also worth remembering that Newark was SIA’s original choice when non-stop flights to New York from Singapore were launched in June 2004 using Airbus A340-500s, then again in October 2018 with the Airbus A350 ULR.

The schedule from 27th March 2022 will see Singapore Airlines offering both a late morning and midnight departure in both directions on the world’s longest non-stop flights.

These will be in addition to the Airbus A380 option via Frankfurt, which will offer the latest Suites cabin and 2017 Business Class seats on a daily basis.

The airline confirmed the following schedule to Mainly Miles.

Further details about SIA’s A380 rollout on the New York JFK flights are available in our article here.

These are the KrisFlyer award rates for the Singapore – New York route.

If you’re looking to book a firm ticket in an eligible booking class, here’s how many miles it will then cost you to upgrade, assuming saver upgrade award availability in your proposed cabin class.

This option isn’t the best value, but it can prove useful if your company is paying for your ticket and you wish to use your personal KrisFlyer miles to upgrade.

Prior to the pandemic, eligible passengers travelling on SQ21 from Newark non-stop to Singapore were invited to the Virgin Atlantic Clubhouse at the airport prior to departure.

That facility has now closed, since Virgin has chosen to consolidate its New York operations at JFK Airport.

Singapore Airlines has not yet revealed which lounge its SQ21 passengers will be able to use once the service restarts at the end of March.

While those flying in Business Class on this flight can access the United Polaris lounge, it is in Terminal C, which means quite a convoluted (but not impossible) process to reach the lounge and then return to the departure gate at Terminal B.

Reinstated SIA non-stop flights to Newark do not require any VTL status, since you can travel quarantine-free to the USA on any service, however at the time of writing the non-stop SQ21 service from Newark to Singapore is not currently planned as a designated VTL flight.

We queried this with the airline, who provided the following statement.

“Singapore Airlines will closely monitor travel demand patterns and passenger arrival caps and adjust our capacity and add new points to our VTL network. Details will be announced when available.”

Our take: It will probably happen!

In the meantime, you may wish to avoid booking the SQ21 service to Changi if you’re looking for a quarantine-free arrival in Singapore, though there’s nothing to stop you booking or redeeming to Newark if that routing / timing works better for you, or better award space is available.

Here are all the confirmed VTL flights from the USA to Singapore, bookable at the time of writing (click to expand):

Operating twice daily to New York and back using its Airbus A350 ULRs will certainly occupy the lion’s share of Singapore Airlines’ seven-strong sub-fleet, requiring four of the aircraft to be deployed practically full-time on these two routes.

The only other planned deployment for the ULRs loaded in the northern summer schedule (Apr-Oct) so far is a three times weekly Singapore – San Francisco SQ34/33 service, requiring a fifth aircraft to be used on a more ‘part-time’ basis.

It will be interesting to see whether Singapore Airlines simply spreads this work across all seven of its ULRs during the summer season, or adds more flights for the type, since there seems to be some extra capacity spare.

All other non-stop Singapore – USA / Canada flights during the period are scheduled using the three-class Airbus A350 Long Haul variant, including those to and from Los Angeles.

Singapore Airlines is going big on New York flights this year, offering three daily services to ‘the big apple’ from 27th March 2022, for the first time in its history.

This will tie in nicely with the carrier’s 30th anniversary of flying to New York in July, and we wouldn’t be surprised to see some celebrations arranged.

This development will also see the airline return to Newark for the first time in two years, and will give travellers two daily non-stop options in each direction on the New York route at ‘opposite’ timings, for additional flexibility.

For the time being, Newark – Singapore flights are not marked as VTL services for quarantine-free arrival in Singapore, though they are almost certain to become so later down the line, in our opinion.

What do you make of SIA’s ramp-up to triple daily New York flights? Let us know in the comments section below.