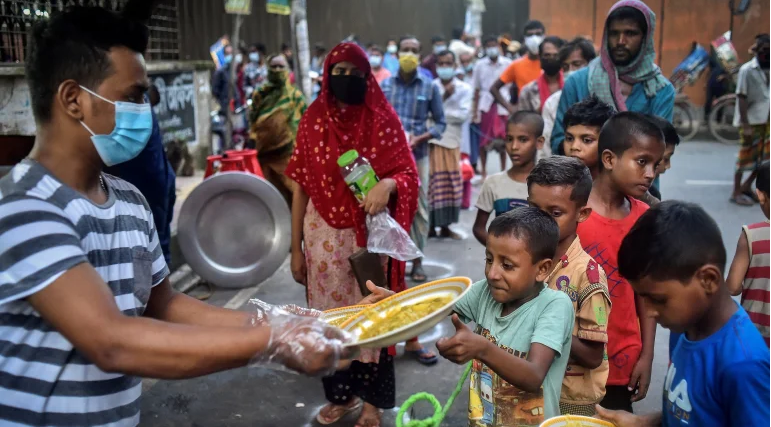 Slum dwellers stand in a queue to get COVID-19 vaccine at Pollibondhu Ershad School in Dhaka [File: Mohammad Ponir Hossain/Reuters]

The government issues an 11-point directive, including mandatory COVID passes and restrictions on events and transport.

Dhaka, Bangladesh – Bangladesh has enforced a new set of rules and guidelines to check a sharp rise in COVID-19 infections in the past week.

The South Asian country reported 3,359 new cases and 12 COVID-related deaths on Thursday, with a positivity rate of 12 percent, according to a daily bulletin issued by the Directorate General of Health Services (DGHS).

The DGHS has declared the capital, Dhaka, and the southeastern district of Rangamati “red zones” as the infection rate in these districts was reported to be between 10 percent and 19 percent.

“We have been witnessing quite a sharp rise in COVID-19 cases. The daily positivity rates now have crossed 10 percent for the past three days,” DGHS spokesman Dr Robed Amin told Al Jazeera.

Amin said more than 80 percent of the COVID-19 cases detected in Bangladesh are still of the Delta variant. “The cases of Omicron variant however are increasing,” he said.

Bangladesh, home to 180 million people, confirmed its first Omicron cases in the second week of December when two women cricketers returned from a series in Zimbabwe.

The latest figures took the country’s total deaths to 28,123 while the total caseload mounted to 1,604,644. On January 1, Bangladesh had detected only 370 cases with a daily positivity rate of 2.43 percent.

“The continuous increase in infections indicates that community transmission of Omicron has already begun to some extent,” Health Minister Zahid Maleque told a media briefing on Wednesday.

The minister warned that the situation could get worse and put a serious strain on the country’s healthcare system in the coming days. He urged people to wear masks outdoors, maintain physical distance, and get vaccinated as soon as possible.

A day after his warning, the government issued an 11-point directive, including mandatory COVID-19 passes and restrictions on events and transport facilities.

The restrictions mandate people to wear protective face masks at shops, shopping malls, markets, hotels, restaurants and other public places. All social, political and religious public gatherings at open spaces have been banned until further notice.

Trains, buses and launches have been instructed to carry passengers at half capacity. The rules also say that students above 12 years of age will not be allowed to attend in-person classes without showing a vaccine certificate.

To enforce the rules, the government has set up mobile courts across Dhaka, though local media reports said the rules are not being strictly followed in the city.

“We are possibly entering into the third wave of the coronavirus because of Omicron variant,” Dr Tahmina Shirin, director of Dhaka-based Institute of Epidemiology, Disease Control and Research (IEDCR), told Al Jazeera.

“It’s a global trend. The whole world has been witnessing a rapid surge in cases. The Omicron variant is very contagious,” she said.

During the second wave of the pandemic in July and August last year, Bangladesh witnessed more than 200 deaths a day for about a month. Many died due to a shortage of medical oxygen.

“This time, the caseloads are likely to be higher than the second wave since Omicron spreads faster. At this point, we can’t be sure about the death rate as global trends suggest Omicron is not as deadly as Delta,” Shirin told Al Jazeera.

She, however, said people should maintain hygiene and follow the COVID-19 guidelines.

“Wearing masks and maintaining social distance is still the best possible way to curb the spread of infections.”