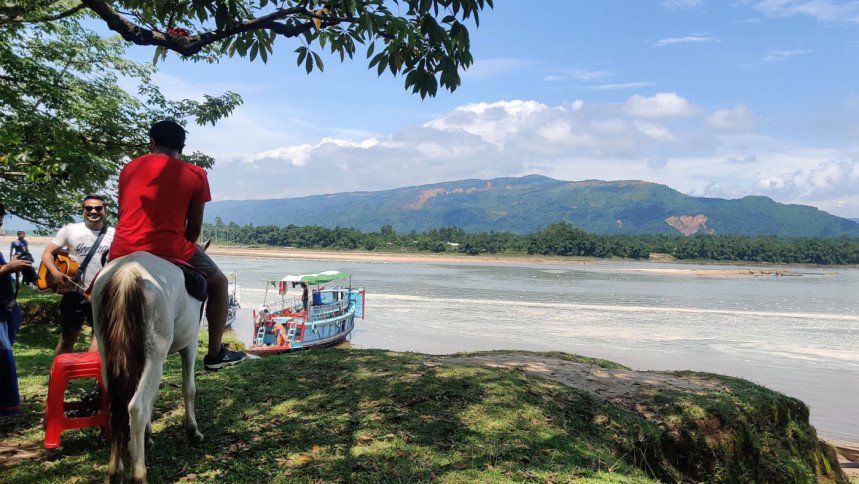 Visitors enjoy their time at Shimul Bagan, which sits on over 100 bighas of land by the Jadukata river in Sunamganj’s Taherpur upazila. Photo: Collected

Young people in Bangladesh are increasingly joining the country’s largely untapped tourism sector on completion of the tertiary-level education instead of running after government and private jobs.

They are finding out new spots and making them popular to serve the growing number of people with disposable incomes.

Many have built resorts, restaurants and pleasure boats in various parts of the country by making investment, thus creating jobs for others.

One of them is Imranul Alam.

He started touring with friends in 2009 when he was still studying at the undergraduate level in Dhaka.

Alam set up a tour operating business, albeit on Facebook, five years later along with three friends after completing his master’s in Japanese Studies from the University of Dhaka. They virtually had no money.

“Experience was our only capital along with mental strength,” recalled the 33-year-old.

In 2016, they gave the business a formal shape after gaining experience and named it Tour Group Bangladesh.

Now, the business is worth around Tk 4-5 crore and about 100 people are employed.

The group has resorts and restaurants, built on the leased land in the Sundarbans, St Martin’s Island, Sajek in Rangamati, Cox’s Bazar, Bandarban, Sreemangal, and Tanguar haor in Sunamganj.

It runs cruise ships in the Sundarbans, boats in Tanguar haor, and car rental business in Bandarban.

“We operate tours in and out of the country. We are offering a lot of tour opportunities in Asia,” Alam said.

Alam and his friends are not alone.

There are many young people who have made a foray into the tourism segment in recent years as it provides huge business potential as people in droves have started exploring the country riding on increasing purchasing power and a relatively good communication system.

The contribution of the tourism sector to the gross domestic product is estimated at 3.02 per cent, which is about Tk 77,000 crore, according to the Bangladesh Bureau of Statistics.

“When we started, young people did not come to the tourism business in a big way. The situation is changing.”

Over the years, many of them have become entrepreneurs, operating tours locally as well as abroad.

He leased a cottage in Sajek in 2019 and three more resorts in St Martin’s Island and bought eight katha of land in the island.

This prompted him to rent an office in Khilgaon of Dhaka. But he was forced to shut it after the coronavirus pandemic spelled disasters for the tourism sector.

When the pandemic eased in 2020, he began sharing an office with another person in Paltan. It returned to profit from September 2020.

He also built a houseboat at Tanguar haor.

“We operate tours both in and out of the country,” said Raju, who has invested about Tk 15 lakh in the business.

Now, he plans to set up a travel accessories shop.

Ataul Islam Masum, founder of Facebook-based group ‘Hit the Trail’, started conducting tours professionally from 2018. He has a resort in Remakri, where he invested about Tk 10 lakh.

Houseboats will be built at Tanguar haor this year and about Tk 15 lakh would be needed in investment, he said. His monthly income is now Tk 50,000-60,000.

M Badruzzaman Bhuiyan, chairman of the Tourism and Hospitality Management Department at the University of Dhaka, says the tourism sector is doing well despite various challenges.

“This is because if you have a guardian, you will be able to take advantage of the potential of the tourism sector.”

There were 40 lakh to 50 lakh tourists in Bangladesh about two years ago. The number has gone up to 2 crore, said Jabed Ahmed, chief executive officer of the BTB.

“As a result, this has become a huge market. As the number of tourists is increasing, it is becoming an attractive place for investors as well.”