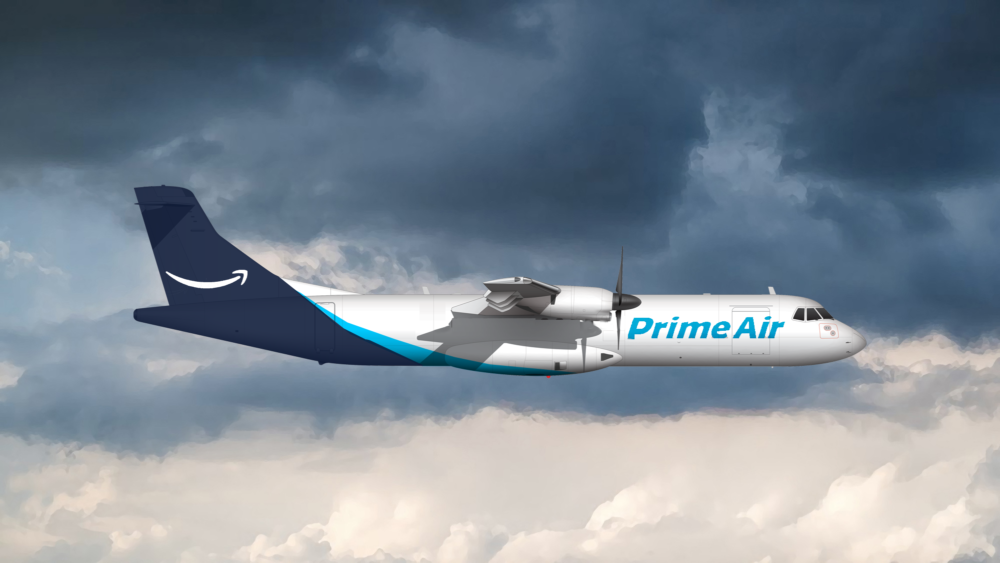 In late June, it was reported that Amazon’s aircraft operations would be adding a third type to the fleet with the acquisition of ATR turboprop freighters. This type joins Amazon’s existing aircraft freighter types, the Boeing 737, and the Boeing 767.

Like the Boeing jets, the ATRs appear to have been acquired on the second-hand market as conversions from passenger aircraft.

What we know about Amazon’s ATRs

According to Airways Magazine, the early-July arrival of an ATR72 freighter marked the third ATR turboprop for Amazon Air.

This third aircraft came from Aurigny Air Services in an all-economy passenger configuration, previously registered as G-VZON. The airline was previously set up to transport 72 passengers. However, after its time with Aurigny, it was then converted to a freighter for Amazon in July 2021. Bearing MSN-853 and registration N919AZ, the 12-and-a-half-year-old aircraft’s new designation as a freighter is an ATR 72-500F.

Planespotters.net data provides details on another ATR72 freighter. This aircraft, registered as N929AZ, is nearly 15 and a half years old. The turboprop previously flew for airlines such as Air Corsica, Czech Airlines, and Air Serbia. Previously registered as F-GRPK, the plane was configured with 70 seats in an all-economy configuration. It appears to have been converted sometime in early 2021.

It appears that the two ATRs we know about were possibly converted at Empire Aerospace’s facilities in Coeur d’Alene (COE), Idaho. Planespotters.net notes that N919AZ was converted at COE, while the same site notes that N929AZ was stored there between its time as a passenger aircraft and being registered to Amazon Prime Air.

While Empire’s website doesn’t specifically mention passenger-to-freighter conversion, the company does list aircraft modification as one of its services. Additionally, the firm operates ATR cargo services for FedEx, with its own aircraft dressed up in the FedEx livery. Thus, it would appear that this firm is set to operate ATR72 freighter services for Amazon as well.

In fact, Amazon’s 767 operations are conducted by Atlas Air, Cargojet Airways, and Air Transport International. At the same time, its 737 freighters are operated by Southern Air, Sun Country Airlines, and ASL Airlines Ireland.

What do you think of ATR72s joining the Amazon fleet? Let us know your thoughts by leaving a comment.