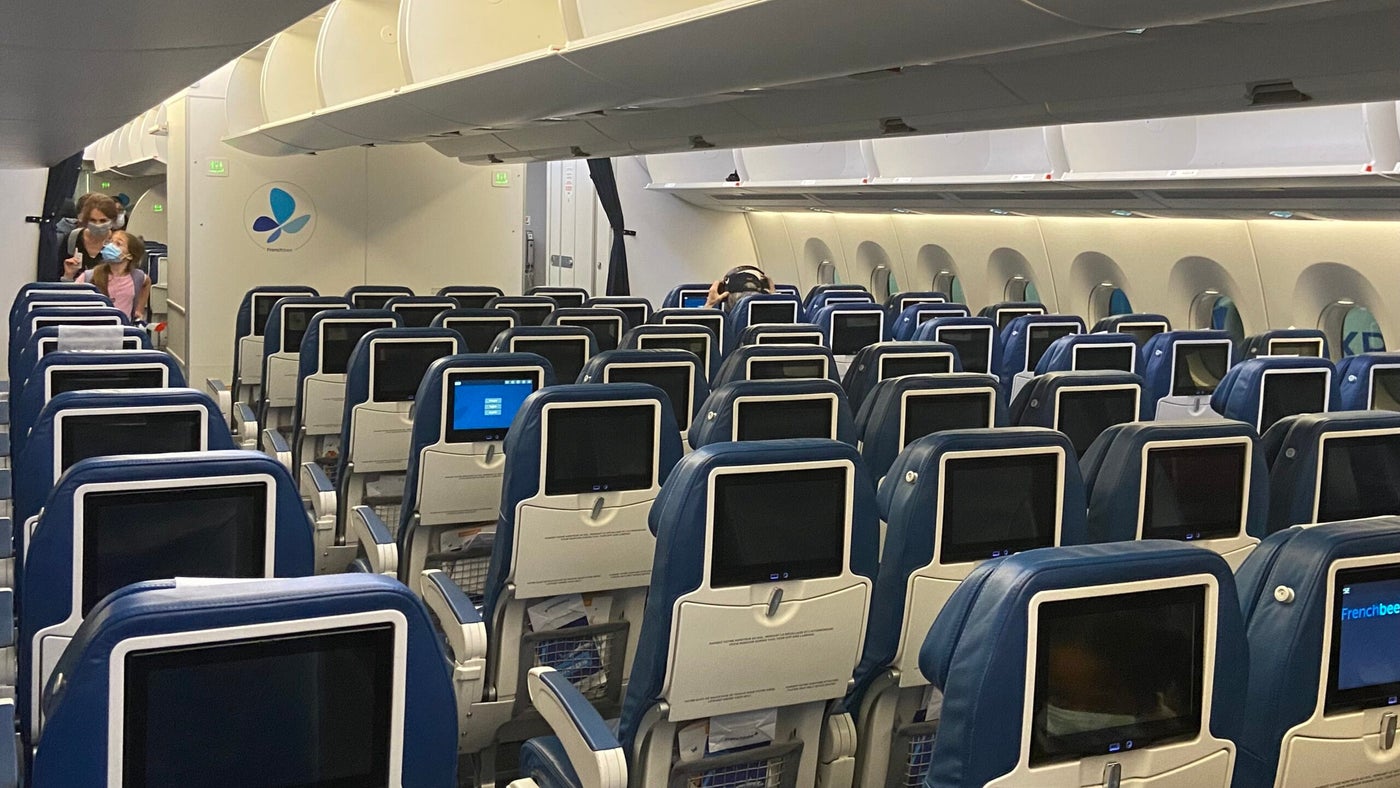 This post contains references to products from one or more of our advertisers. We may receive compensation when you click on links to those products. Terms apply to the offers listed on this page. For an explanation of our Advertising Policy, visit this page.

After a lovely three days in Paris, it was time to fly home on July 19. After flying on low-cost carrier French Bee’s inaugural flight from Newark-Liberty International Airport (EWR) to Paris Orly Airport (ORY), I wasn’t quite sure what to expect on my flight back.

I shouldn’t have worried. Flying home on French Bee was a complete 180-degree experience, and not just because I had a seat in the carrier’s premium class. Let’s compare my flight over with my flight home.

When you crunch the numbers, the fare difference between my smart economy and premium really wasn’t that great, considering the benefits you get in each.

Considering the experience I had in economy, I’d be more than happy to pay an extra $15.70 and take my entire French Bee trip in the premium cabin. It’s good to note that you can add premium-like experiences to your smart economy fare. I paid $18 for priority boarding and $20 to choose my seat. You can also pay for perks including priority baggage ($20 online, $25 at the airport), line jumping for security and customs checks ($25 online, $30 at the airport), lounge access ($37) and even $260 for a pre-flight upgrade to the premium cabin.

Please note that French Bee’s fares can change, based on when you plan on traveling. Looking ahead to October, you can see below that the fare gap is bigger between smart and premium class, at $215.26. That can be too much of a jump for those set on budget travel.

In Newark, I used my smartphone to do online check-in, which was wonky at best. The QR code on my boarding pass didn’t pass muster at the TSA screening checkpoint, so I was guided to a kiosk to check in. The problem there was French Bee didn’t show up on the screen, so I was taken to customer service, got a paper pass and made it through.

The check-in process at Paris Orly was a better experience than the one at Newark. After arriving at the airport at 2:45 p.m. for a 6:45 p.m. flight. There was a line to get into the terminal, and only ticketed passengers were allowed in. Security was asking for passports and boarding passes, which caused some confusion, since most of us were checking in at our respective airlines. I showed security my itinerary on my smartphone and was waved in.

I went over to a check-in kiosk, where I was happy to see it had French Bee on the screen. But even when you clicked on the airline’s name, nothing happened. When I asked a French Bee representative for help, he tried, shrugged his shoulders and pointed me to the check-in counter for my flight, which was pretty empty. I went to the Premium check-in line, where a man looked at my passport and my negative COVID-19 test and sent me to the check-in counter.

As I learned at Newark, French Bee is a stickler for weighing all bags, requiring no more than 50 lbs. for checked and 26 lbs. for a carry-on. I was worried that my carry-on bag was overweight, but there was no need — my bag made the weight, so I avoided having to check it to Newark.

The check-in agent again looked at my passport, my negative COVID test and then handed me a boarding pass. It included a sticker that let me go in the expedited customs and security lines. This was a welcome change from Newark, since Terminal B doesn’t have Clear or TSA PreCheck (French Bee isn’t on the list of TSA’s approved airlines), forcing me to stand in a line for 30+ minutes.

Once I cleared TSA at Newark, it was a short walk to my gate. However, at Paris Orly, the signage was a bit confusing. I ended up taking the train to what I thought was my terminal. It was a nice ride, but I was already in Terminal 4, where I needed to be.

The regular customs line at Orly was long, so I was happy to have the premium access that came with my fare. Again, I showed my boarding pass, passport and COVID-19 negative test, and was on my way to security screening. The premium line was empty, and I had to be reminded to take out all my bagged liquids, along with my laptop and iPad. I had to remove the electronics, but not the liquids, at Newark.

Newark Terminal B, like many airports across the country, had only one dining option in our boarding area. It was a bar/restaurant that wasn’t serving food. But the seating was good since the boarding area was scarce with two other airlines also boarding near our time.

At Paris Orly, I used the Priority Pass membership that comes with The Platinum Card® from American Express (enrollment required) to gain access to the Salon Icare lounge near my gate. While I was happy to have the space away from general gate seating, this lounge was badly in need of an upgrade.

While the Newark boarding process was chaotic (even with the premium board I paid for), it was a much better experience at Paris Orly. There were clearly marked stanchions for premium and economy passengers, along with separate jetbridge access. After my boarding pass was scanned at Orly, there was a five-minute wait to board the flight. I was warmly greeted by the flight attendants as I boarded my Newark flight. The greeting for the Paris Orly flight was perfunctory, although we were given a sanitizer hand wipe.

Premium class vs economy on French Bee’s Airbus A350

Here’s where the experience between premium and economy diverged. My smart economy fare came with a checked bag and a meal, although you could go for basic if you don’t want either. My premium seat back to Newark came with two checked bags (that I didn’t use) and a meal I missed because I was asleep.

The smart seat was in the 3-4-3 configuration, with 32-inch pitch and a 16-inch seat width, which is a bit tighter than the usual 17- to 18-inch width at other airlines.

My premium seat was a more-comfortable 2-3-2 configuration with a footrest, 36-inch pitch and an 18-inch wide seat.

I was lucky on my flight to Paris because I had a row of three seats to myself, which made the flight much more comfortable for me.

When it came to my premium seat, it wasn’t lie flat, but but it was pretty comfortable. However, if you weren’t sitting in the bulkhead seat, it had the potential to be a bit awkward, since when the seat fully reclines, it encroaches into the space of the passenger behind you. The premium cabin wasn’t full, so it wasn’t a problem.

The overhead bin space was exactly the same in the economy and premium cabins.

The under seat space in economy was what you’d expect on most carriers.

But unless you are carrying a small purse or a laptop bag, you can forget about putting anything else in the premium seat in front of you on the fuselage row, since a metal bar splits the room under your feet. Again, the cabin wasn’t full, so I just put my carry-on bag into the overhead bin.

The meal in economy was a breakfast that was almost inedible because it was so bland. And as would be expected on a low-cost carrier, you paid if you wanted snacks and drinks in economy.

After waking up on the flight home to Newark, I asked the flight attendant about the meal I missed. It was chicken in a cream sauce, a vegetable terrine, rosemary crackers, brie and manchego cheese, a choice of a roll or a baguette and a creme caramel for dessert. She gave me a small cheese plate with a baguette for a snack, since the special snack I ordered didn’t make it on the flight. There was also free beer, wine, champagne, soft drinks, tea and coffee.

The inflight entertainment was the same in both cabins. However for those in premium class who didn’t want to watch any of the 76 movies or 25 television shows, you had the option of taking an iPad mini tablet that was downloaded with French and English magazines, newspapers and books. The flight crew was stellar on the premium leg of the flight. They came by regularly to offer drinks and check to see if we were comfortable.

This was a much better experience than my Newark-Paris Orly flight. French Bee has been flying out of its home turf of Orly since September 2016, so except for the broken kiosks, it was a much better check-in and boarding experience. This is the leg of my flight that I would actually fly again.

While it’s not the same experience as, say a Qsuite on Qatar Airways, it was a nice step up from my economy seat from Newark. For travelers who want a flight to Paris looking for an upgraded experience without a big price tag (my seat was $568), French Bee’s premium cabin is a solid option.

As for economy, I expect the process out of Newark to get better as French Bee operates more flights and works out the kinks. That being said, I can only recommend this product if you’re trying to get to Paris at the lowest fare possible.