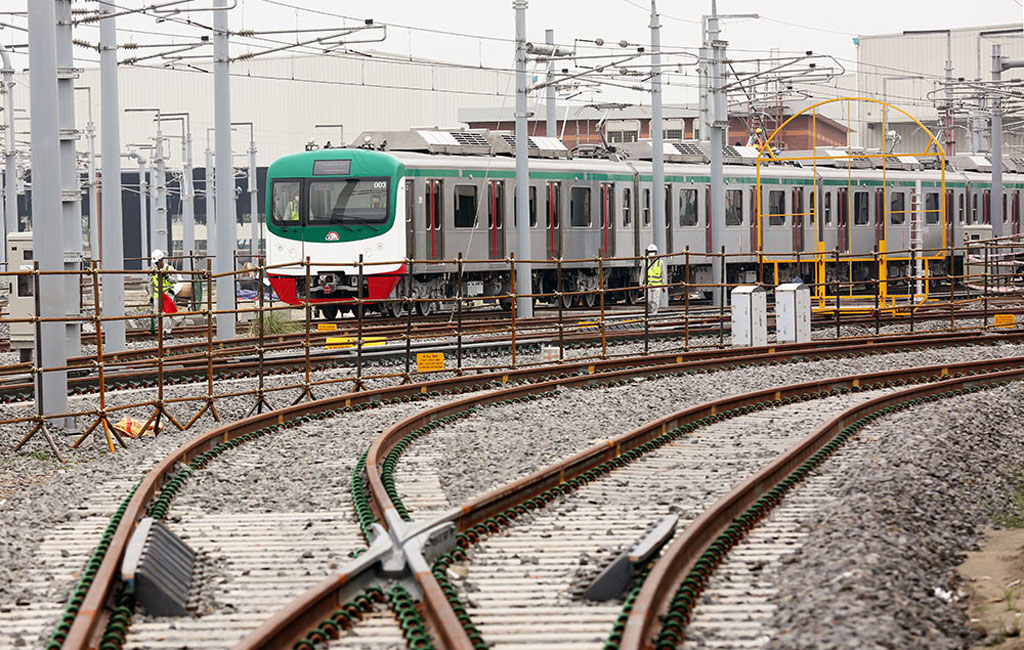 The overall progress of the construction of the metro rail is about 68%, says the project director

Bangladesh’s long wait for its first-ever metro rail is going to be over by December 2022 as work on the project has gained momentum despite disruptions by the coronavirus pandemic, said MAN Siddique, managing director of Dhaka Mass Transit Company Ltd (DMTCL).

“Work on the project is now moving at a fast pace despite the Covid-19 situation in the country,” Siddique said, exuding confidence.

The overall average progress of the construction of the metro rail is about 68%.

As per the initial construction plan, 87.8% of the third phase of the Uttara to Agargaon part is done.

The first train set arrived in Bangladesh on April 23. After that 19 types of tests were conducted on it at the DMTCL depot in Uttara. A test run of 500 meters was also successfully completed with it inside the depot on May 14. The 2nd train set also went through similar procedures after reaching Dhaka on June 1.

“Five more train sets for the metro rail will reach Bangladesh by next September. By 2022, all trains will be running and Metro Rail will be officially launched in December 2022,” the managing director said.

He said that two train sets ar already in Dhaka and two more sets currently at Mongla port will arrive here in the third week of August. “As such, there are now four train sets in Bangladesh,” he added.

Although a portion of the Dhaka metro rail project was supposed to be finished in 2019-20 and was later rescheduled for 2021, it did not materialize as works were delayed due to Covid-19 wreaking havoc in Bangladesh.

On this question Siddique said: “See, when the project was approved, the initial plan was to launch it by 2024. So if we keep that in mind, we are still two years ahead.”

To put things into context, the original implementation period of the project was 2012-2024.

However, seeing the progress, the government directed that metro services from Uttara to Agargaon be made operational by 2019 and from Agargaon to Motijheel by 2020.

But after failing to reach the deadlines, the authorities in May 2019 said the project would be launched on December 16, 2021 to mark the celebration of the golden jubilee of the country’s independence.

In an unexpected turn of events, construction had to be suspended for over two months last year due to Covid-19 which resulted in further delay.

Although no fatalities reported so far, as many as 668 people working in the project tested positive for coronavirus till May 31.

When Siddique was asked what the authorities are doing to mitigate the risk of the workers, he answered that they have already provided two vaccine jabs to all personnel working in the project.

He also ensured that the health guidelines are strictly maintained during the work.

“The metro rail coaches will be air-conditioned,” he said. “Each coach will have 4 doors on either side,” he added.

The train will stop at 17 stations. One side will open when the train arrives. A separate staircase won’t be needed to get on the train.

He also added that the stations would consist of three floors and be as modern as it gets with all required facilities.

MAN Siddique hoped that the traffic congestion in Dhaka would be reduced to a great extent once metro rails run in the capital.

According to DMTCL sources, the Kawasaki-Mitsubishi Consortium is constructing 24 train sets for the Dhaka Metro Rail Project.

When Siddique was asked about metro rail fare, he said that a committee has been formed to fix a reasonable fare considering every factor.

The original length of the metro rail route was 20.1 km from Uttara to Motijheel, but it has now been extended by 1.16km to Kamalapur Railway Station.