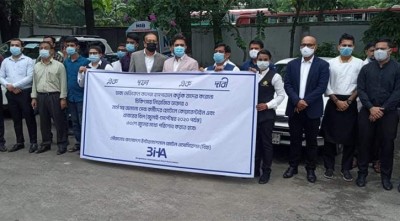 Hotel owners have staged a sit-in to demand payment of arrears of quarantine and food bills of doctors, nurses and staff of 30 hotels in the capital.

If the bill is not paid by the 30th of this month, strict action is warned.

The human chain was carried out under the banner of Bangladesh International Hotel Association (BIHA) next to the office of the director of Dhaka Medical College (DMC) Hospital at 11am on Monday (June 21).

Bihar co-chairman of the human chain. Khaled Ur Rahman said the decision was taken by the government in March last year during the corona virus to quarantine doctors, nurses and staff at the hotel.

The government later contacted our hotel association. We then contact all the hotels so that we can keep the doctors serving in Corona in quarantine.

He said quarantine was arranged for them in 30 hotels in June, July, August and September last year.

Therefore, an agreement has been reached with DMEC Hospital and our bill will be submitted 10 days in a row. Then our bill will be paid within seven days. There was a bad time in the country, then we hotel owners came and stood by the government. When everything was off due to lockdown. Then we brought the hotel staff back to the hotel from home. I also give some new appointments. Then we serve them as coronaries. But we didn’t get the bill.

“International flights are closed due to the lockdown, so our foreign guest reliance is on the way to closing our business,” he added. I can’t pay the staff. I can’t pay the hotel utility bill, they are also giving notice, disconnecting all services. If the bill is not submitted by June 30, we will announce a strict program. Our hotel money has been allocated from the Ministry of Finance. But DMK Hospital is not paying our bill yet. According to the ministry, the billing process was completed in July last year and DMEC Hospital will pay the bill. But we are constantly following them. If this continues, our organization will be closed.

Bihar Co-Chairman. Khaled Ur Rahman said the four-month bill from June to August last year was outstanding. Of these, we only received the bill for the month of June. About 40 crore rupees was not received for the remaining three months. I have been looking for this bill for 11 months. That is why we are seeking the intervention of the Prime Minister and the Minister of Health.

ATM Saidul Alam, vice-president of Manobbandhan Bihar, said, “Our backs are now stuck to the wall. We have no choice but to stand here in human chains. Our hotel business is in danger due to non-arrival of foreign guests. All kinds of utility bills so that we can pay without penalty or any kind of interest. We are also requesting to reduce VAT on our hotel business for one year.

Responding to a question from reporters, Bihar vice-president Saidul Alam said, “We will not take any legal action.” We don’t know why he is not paying our arrears.

At the end of the human chain, they handed over a memorandum to the DMEC director.

In this regard, the director of the DMK hospital, Brigadier General. Nazmul Haque told banglanews that we are delaying to pay the bill due to systemic reasons.

In response to a question, Brigadier General Nazmul said there was no irregularity. The intelligence agency has already investigated the matter. As per our rules we have submitted everything to the ministry. We also got the budget. Just waiting for approval.