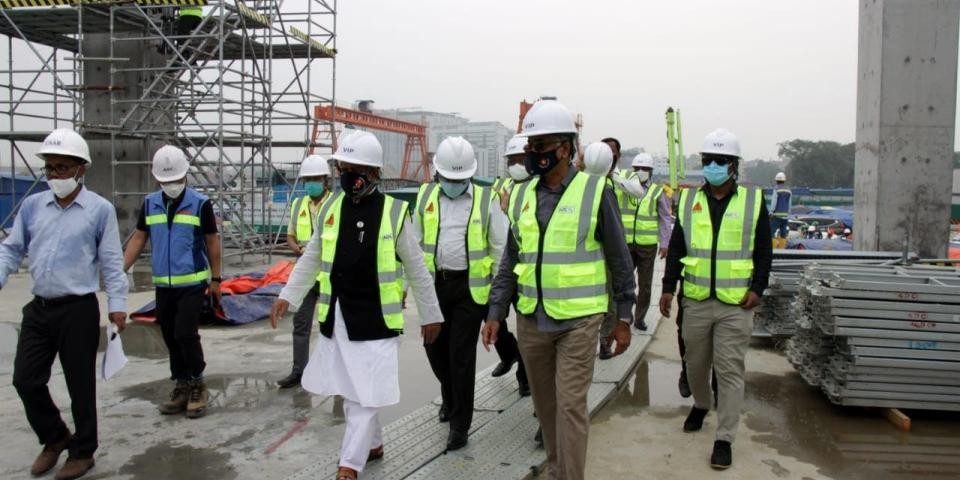 The construction work of Hazrat Shahjalal International Airport’s Terminal 3 is ahead of schedule, said M Mahbub Ali, State Minister for Civil Aviation and Tourism, while observing the progress of construction today.

The junior minister said the size of the terminal would be more than double of the current airport. The terminal will be connected to Ashkona Hajj Camp through a tunnel that will allow pilgrims to enter the airport directly from the camp.

The state minister said the terminal’s construction work did not stop for a day, even when the whole world was at a standstill due to the Covid-19 pandemic. The construction of this terminal is expected to be completed in June 2023. However, there is hope the work will finish ahead of schedule.

Prime Minister Sheikh Hasina, in December 2019, inaugurated the construction work of the new terminal, which is expected to be modern, world-class, and more befitting of an aspiring higher middle-income country.

The three-storied terminal building, covering an area of 2.30 lakh square metres, will be built by Mitsubishi and Fujita of Japan, and Samsung of South Korea.

There will also be a new car parking facility for 1,230 vehicles, a new 63,000 square metre import and export cargo complex, a 5.42 lakh square metre apron for 37 aircraft, among others.

Around two crore passengers will be able to use the airport following Terminal 3’s construction, 70 percent of the funding for which is coming from the Japan International Cooperation Agency (JICA).

In its current form, Hazrat Shahjalal International Airport can handle eight million passengers a year. But the number of passengers is expected to reach 14 million by 2025 and 24.8 million by 2035.