Bang Sue Grand Station: a look at the future of rail travel in Thailand 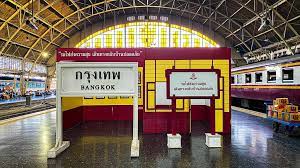 Train travel in Thailand has always been a favourite method of transportation within the Kingdom. Travelling domestically by train is simple, cheap, and oftentimes thrilling. For many tourists, the experience of taking a long-distance train in Thailand is their introduction to Thai culture beyond (and in between) hubs like Bangkok, Chiang Mai, and Phuket.

Currently, there are over 300 stops within the State Railway of Thailand (SRT)’s system. The current railway consists of 5 separate lines and spans a total length of 4,346 km.

There is a palpable air of nostalgia attached to train travel in Thailand. This feeling is derived from various places and things, including the classic look and feel of the trains, vendors jumping on and off to sell traditional Thai snacks, and the plethora of scenery changes on any cross-country rail journey.

Taking the train is a standard mode of transportation for tourists and locals alike. While locals often use the trains to commute, transport goods, and travel between provinces to visit family, there are several routes that many seasoned tourists to Thailand would consider to be a rite of passage for anyone looking to experience the rail system here.

One such line is the sleeper train from Chiang Mai to Bangkok, which offers a unique view of the entire region from one of Thailand’s northernmost points to the bustling hub where it stops in Bangkok.

In the digital age, train travel in Thailand flourishes online with a following of admirers from Thailand and abroad contributing to a steadily-growing collection of content that appetises anyone looking for train sentiment.

One of the more popular communities was built with the hashtag #รถไฟไทย. Pronounced as “Rotfai Thai,” which means “Thai Train” in English, this hashtag enables content creators to connect with other Thailand train enthusiasts. This community shares their thoughts and experiences on Thailand’s rail systems with other train lovers worldwide. Searching this term offers copious feel-good YouTube videos, tweets, and Instagram posts of train travel around the Kingdom.

At the core of this community is what many train admirers consider to be the heart of the entire train system in Thailand: Hua Lamphong, also known as Bangkok Station.

Since its opening in 1916, Hua Lamphong has acted as the central hub of train travel in Thailand. It is just one of the 16 junction stations operated by the SRT, and has become the poster child of rail travel in Thailand over the last 100 years.

Although it is right in the middle of bustling Bangkok, Hua Lamphong Railway Station looks and feels like an old-time experience. No matter what the time of day, it is full of people quickly jumping on and off the trains, scattering between platforms, taking photos, and rushing to make connections to other transportation systems connecting to the Bangkok metropolitan area.

Bangkok’s designated central station, Hua Lamphong, is on the cusp of being transferred to a robust, shiny new terminal in the Chatuchak district of Bangkok.

Bang Sue Grand Station, which began construction in 2013, is equipped with 24 tracks and is capable of accommodating up to 40 trains at the same time. Sitting very close to the Sirat Expressway, Bang Sue Grand Station covers an enormous 1,280 acres, positioning it to become the largest railway station in all of Southeast Asia.

The most impressive upgrade being made with the construction of Bang Sue Grand Station is the introduction of a high-speed railway platform, which first aims to connect Bangkok to Nong Khai Station in Isan (Northeastern Region). This is the premier international train destination in an extensive plan to connect Thailand to other destinations; such as, Singapore and China.

For locals, the use of Bang Sue Grand Station as a hub is expanded by its connection to the Airport Rail Link upstairs and the MRT system underground.

There have been some construction setbacks over the last few years, Bang Sue Grand Station is currently on track to open some of its lines to the general public as soon as the end of 2021.

In addition to opening Bang Sue Grand Station as the new central hub for train travel in Thailand, the SRT also debuted a new online booking system last year. This new system, called DTicket, makes it easier and faster to book train tickets for domestic travel in Thailand, in Thai or English language.