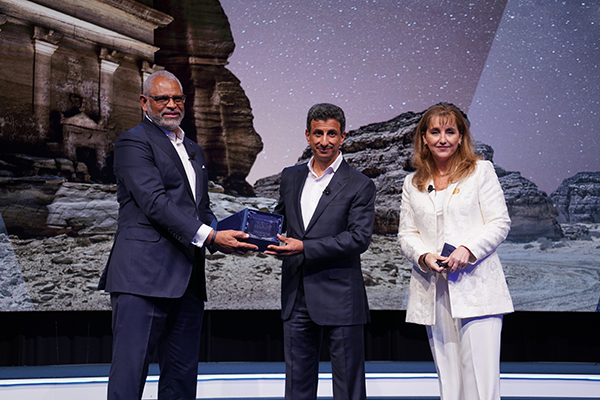 Countries and top tourism leaders from around the world have been recognised with awards by the World Travel & Tourism Council (WTTC), at its Global Summit 2021 in Cancun, for their outstanding global leadership.

The awards acknowledged the world-class leadership qualities displayed by a specially selected group from among hundreds of the world’s foremost business Travel & Tourism leaders, government officials and key decision-makers.

Carlos Manuel Joaquín González, Governor of Quintana Roo, which includes Cancun, Mexico was given the Global Leadership Award for his role during the COVID-19 crisis.

Cancun’s early, successful adoption of the WTTC Safe Travels stamp led the way and was recently given to the 250th destination.

His Excellency, Ahmed Al Khateeb, Minister of Tourism of the Kingdom of Saudi Arabia, was awarded the accolade of Global Leader, for making history earlier this year by embracing the private sector in the G20 Tourism Ministers Meeting for the very first time.

Gloria Guevara, WTTC President & CEO, said: “2021 marked a year of unprecedented hardship and challenges for the global Travel & Tourism sector. So, we are honoured to be able to recognise so many top achievers for their incredible efforts to revive the sector by displaying such admirable leadership qualities.

“Our esteemed winners this year have demonstrated the very best values and qualities which our sector shows on a daily basis to encourage travellers and holidaymakers to venture out and explore the world.

“This has been especially difficult over the past 12 months as the pandemic has ravaged our sector, devastating businesses and the jobs of so many people who depend upon it for their livelihoods.

“But we recognise our winners today for taking bold steps to halt and reverse the impact of COVID-19 with 12 major awards and thank them for their courage and dedication.

“From Cancun, Mexico, to Saudi Arabia, Greece, Spain and the U.S., to name but a few, destinations and their leaders from around the world have stepped up to the mark to save a sector which in 2019, before the pandemic took hold, generated one in four of all new jobs around the world and contributed 10.4% (334 million) jobs globally.

“From the bottom of my heart I wish to thank each and every one of our winners – and those around the world, who each day stand up to make a difference – to bring cultures together, encourage mobility and unite us all by making Travel & Tourism essential to our happiness and well-being.”

Under the theme “Uniting the World for Recovery” the Global Summit made history by becoming the first-time global Travel & Tourism event where leaders gathered face-to-face since the COVID-19 pandemic damaged the sector and halted all major events around the world since March 2020.

10 Champion Awards were also announced at the Summit:

WTTC ensured strict world-class health and hygiene protocols were in place to protect key private and public sector participants at its Global Summit, with testing available for all delegates attending in person.

They met to discuss their experiences and share best practice on topics from kickstarting recovery in the Travel & Tourism sector to how to enhance sustainability and inclusivity.

The Summit also acted as the platform for recovery and will be the place where a roadmap will be defined to take the sector towards restarting international travel and existing in the new normal.