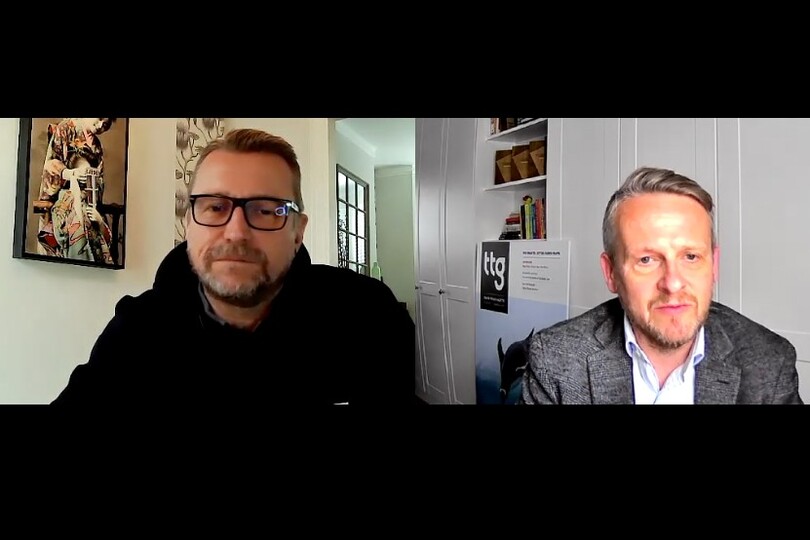 How have you been looking after your mental health and physical wellbeing over the past few months?

“Everybody was really severely affected when we all went into the first lockdowns. That was quite a depressing time for many people to get their heads around what was going on. None of us had experienced lockdowns before, and of course we were all moved straight into working from home. Initially people thought it was going to be a short-term measure and were looking forward to getting back to the office, then it began to dawn on us over the summer that that wasn’t going to happen anytime soon. Now we’re into the second year… I think once you began to realise that this was set for a longer term than we had initially thought, I think people began to make adjustments.

“Initially there were lots of memes about, you know, drinking lots of wine and stuff like that. But then people began to set new routines, and found a new norm being at home. And what was challenging for a lot of people, myself included, was that our homes became our offices. Working from home seemed like a great idea when we had an office to go to because then you could work from home on a Monday or a Friday, something like that. But when your home becomes your office, you have that challenge of making sure that you switch off and actually, you know, shutting your laptop down.

“I’ve got two, two small young kids, and it was very important for me to switch off for them and make sure that they have time in the evening. And then I spent time with them during the morning, even walking them to school on quite a few days, which was very therapeutic. I enjoyed that, as it wasn’t something I used to do when I was at the office. We got into eating more healthily and cooking at home all the time. We actually started to focus a little bit more on our own cooking and our own health. We said three, four nights a week, we’re going to start cooking, but we decided to go down the ‘Mindful Chef’ route – which was great fun until I got to the point where I was getting a bit fed up with vegan recipes! I’ve also joined the F45 gym in Wandsworth and I go there three lunchtimes a week. And I go cycling with the kids and stuff like that. So it’s been about getting into a routine of being at home, as opposed to being in the office.”

“You have to force it a little bit, I think it’s very easy just to slip into ‘your home is your office’ and just spend all your time working. And then when you’re finished, just sit down on the sofa and watch some television. I think you really need to make an effort to push yourself into a new set of routines that you might not have done before. I do think that for everybody, it really helps good mental health to be doing some form of exercise and eating a bit healthily during the week.”

What’s been your most challenging moment of the crisis?

“A couple of things: firstly when reality set in and people began to realise that costs were not where they needed to be for the ongoing business that we had, both in travel and meetings and events, and that we were going to have to have people on furlough leave, and reduce some team sizes as well. We have seen people go because they’ve got other jobs, which is great for them, but some people have left the company that we really didn’t want to see go as well. And that was tough. So there’s been some difficult conversations over the past 12 months, with people that you didn’t want to have, conversations that were purely a result of the pandemic and, and the cost situation of company.

“Secondly, my remit is global and at some point in time, I’ve always had somebody in the team who’s been affected by the crisis – whether they’ve actually had Covid themselves, or whether their parents have had Covid, or if they’ve had regular illnesses that have been affected by the pandemic. Those things are really tough. And you feel for the team members that are going through a tough time and that’s still happening now. And you’re trying to support them over Zoom calls but it’s just not as personal.”

What strategies have you been using to strengthen your personal resilience?

“For me it hasn’t really been so much about personal resilience. I mean, as, as a senior leader you’re just trying very hard to support others around you. I felt that was much more my role than putting things in place for myself. I’ve got a team of people around the world who are all at different stages of life. And I want to make sure that both myself personally and CWT do everything we can to support them, to understand what personal circumstances they are in, and to keep them motivated. I found my own motivation through keeping others motivated, and that to me was incredibly rewarding.

“One of the other things that that was satisfying was finding out once we reduced teams that we had some skill sets in the company that we never knew we had. People came forward and said ‘Hey, look, in a previous role, I used to do virtual events!’ Some people had unbelievable creative skills in the company that we didn’t know about because they used to enjoy doing creative stuff in their personal life. All of a sudden we had people popping up all over the world – Asia, Latin America – saying I’ve got these skills. And we started acting really as a global community, the pandemic forced us into becoming much more of a community, where we became borderless. And I really enjoyed trying to motivate others through that.”

How have you been looking after your team, and your agents? What steps have you put in place to look after their own wellbeing in this period?

“CWT is a very big corporate, and we have a lot of internal communication opportunities. One of the things that we quickly switched on was an internal site for wellbeing. It started off as very basic as ‘Wellness Wednesdays’ where we had the executive leadership team sharing their thoughts on nutrition, on food and there was stuff around protecting your eyes and screen time. Every week there was more information and that began to grow as the community started contributing to it.

“We then moved that on to fitness challenges. We’re just about to start, um, a fitness challenge this week, which is for the World Federation of Mental Health. The Carlson family foundation has agreed to contribute a dollar for every mile that everybody does in swimming, cycling, and running up to a maximum of $10,000 to donate to the charity, which is fantastic. They also started yoga on Thursdays, a global yoga community that they did live on a UK time. So a central hub of wellness began to form and develop and involve with so many great ideas coming forward. And I’m quite proud of the company for doing that.”What positive lessons have you discovered about yourself, or the company, during the crisis?

Will they change the way you run the business in future?

“The positives are mainly around communication. That is a very, very broad subject but I think everybody’s learned to communicate in a new way whether through Zoom calls, Teams, Webex – so much communication has had to change away from being face-to-face or even on the phone. And that’s right people have connected around the world really easily because of this technology. It’s been great for new initiatives and for sharing information.

“On top of that, the industry has learned that we might not need to travel as much in future, and that’s a challenge for us as both a travel company and events company. Of course we want to see travel back to normal levels, but there’s lots of different reports out there saying corporate travel may come back to 80% or 70%. We don’t know. Companies are taking stock of their carbon footprint, relating that to sustainability and saying, do we really need to travel? And could we do a half-day over Zoom? And I think we’re now questioning that a lot more and making sure that when we put meetings and events in place, they really have a strong value to them.

“And if they can be done electronically, then perhaps that’s saving the carbon footprint and that’s a great discussion to be had. The pandemic has globally raised awareness around responsible business and sustainability. And that’s a real positive, although it’s also a challenging thing for some businesses.”