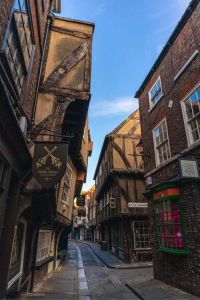 With overseas holidays still convoluted and unclear, and with the introduction of passport vaccines, it’s fair to say that travel may not resume fully back to normal in the summer of 2021. Some may wait and gamble on the hope, but in the meantime staycation accommodation is being rapidly booked up by those hedging their bets.

Even with the proposed traffic light system, countries can very quickly change category, meaning a lot of money can be lost on a last-minute cancellations. Or, a change in Covid-19 variants may make vaccines less effective than realised. Essentially, there’s still plenty of ways that overseas holidays are under threat this summer.

So, with that in mind, let’s explore the six great alternative staycation destinations that this summer presents. We’re all aware that Cornwall was announced one of the 8 most beautiful beaches in the UK and Lake District is incredible – and we shouldn’t ignore that. But, here are six fabulous places that are often unfairly overlooked.

Edinburgh
The Scottish capital Edinburgh is a fantastic choice for a staycation, particularly for those in southern England that rarely get to enjoy what Scotland has to offer. With fascinating Scottish history and gorgeous architecture, there’s no shortage of incredible accommodation possibilities when it comes to the Scottish capital.

To add to the incredible city itself there is the Edinburgh Festival Fringe, which is considered to be the world’s biggest arts festival, hosting many amazing young comedians and other events. Many of the shows are free too, meaning you can enjoy a unique festival that will feel as if times are back to normal – all without the stress of worrying if your flights or overseas plans will be cancelled.

Besides the festival, there’s many great walking tours available that explore castles, churches, and many other monuments. Edinburgh castle in particular is iconic and is considered to be the masterpiece of the city, which reliably amazes the many visitors it receives. The nearby museums will explain a lot about this history, whilst the scenery and setting of the city center is where many great films were shot, such as Da Vinci Code and Trainspotting.

Belfast
Belfast isn’t always on the radar for many Brits as a holiday, but this is a big mistake. Belfast is a profoundly cultured city with incredible restaurants, nightclubs, history, and a lot of activities to do.

Given the city’s complex and difficult history, there are places such as the Peace Wall to understand them better – a wall built in 1969 to separate warring Protestants and Catholics. Considering it’s a cultural hub, there’s a lot of great museums too, such as Odyssey Pavilion where there’s many interactive exhibits and is steeped in science.

The International Travel and Tourism awards announced Belfast as the world’s best food destination – meaning this is the place to come for foodies. Belfast embraces food from all around the world, meaning you have all the choices. Of course, there’s a lot of great accommodation choices here too, in particular the old town houses on AirBnB.

Snowdonia National Park
Snowdonia is often thought of as a single mountain, but this couldn’t be further from the case. Snowdonia has an enormous stretch of lowland forests, rivers, valleys, hills, rolling pastures, and mountains.

Furthermore, its stunning coastline has incredible beaches, Roman ruins, and prehistoric circles. This makes it a great summer destination, because you can go for surfing lessons or just general sunbathing.

With a peak height of 1,085 meters, Snowdon mountain is one of the largest in the UK, though it’s not too steep and difficult to climb relative to some others making it achievable for even casual hikers. So, even if the weather isn’t sunbathing weather, you still have some incredible nature to indulge in.

Bournemouth
Bournemouth is somewhere between a well-known seaside destination and a lowkey one. Over time, it has established itself as a beach haven, where hundreds of thousands of visitors flock across the 7 mile stretch of golden sand – the longest stretch of beach in the UK. Of course, you’re near Sandbanks too, which also shares the pristine sands and even hosts beach festivals with well known DJs.

Heading over the other direction, Stanpit and Christchurch offer fantastic history and walking opportunities, such as Stanpit Marsh Nature Reserve and Hengistbury Head. Bournemouth also offers some great days out too, with Poole boat trips touring Swanage and Old Harry Rocks, along with being a boat ride away from the Isle of Wight.

Perhaps the biggest highlight of Bournemouth is during late August, when the Air Show takes place and the RAF displays incredible areial skills with their coordination. The Red Arrow tours are world famous with their choreographed Hawk T1s and Bournemouth is very much the place to see them each year, not to mention the endless beach stalls, food stands, and fairground rides that are put up. York
York is a beautiful northern town that is steeped in Roman history and amazing architecture. It’s a popular tourist destination for this reason – people are searching for the epitome of Britishness, and York is a place to find that. This opens up a world of great staycation accommodation possibilities, with cosy streets and tonnes of character that is used to hosting tourists.

Yorkshire Dales National Park is a nearby countryside space that’s great for a day out, particularly if you’re travelling with a campervan or similar. York Minister is a must-see too, which is a Gothic building with 275 steps to climb up. From the top, you can admire York in all its architectural glory. In fact, you should be able to see the York City Walls which stretch two miles and were built in the 13th century. It might not be the Great Wall of China, but it’s ours!

Of course, there is the Shambles too, which is one of the most preserved medieval streets in the world with its narrow cobbled lanes and 14th century buildings. Inside the buildings you can find a bunch of quirky independent shops, pubs, and cafes. At some points, the streets become a matter of 6 feet wide, creating an incredibly cosy atmosphere of authenticity.

A Rail Journey
Okay, this last one isn’t a destination per se, but it’s an often overlooked holiday idea that is truly unique. By using somewhere like Great Rail, you can plan your own routes around the UK with a train fit for royalty – accommodation, half board, and various guides are all available.

You can even let the guide arrange everything for you, including the route. This is a great way to actually explore the country you live in but in a very new light. Plus, many of the routes you go on will explore areas, such as the Ribblehead viaduct, that you will not come across unless you’re on a train.

And don’t worry, Britain’s infmaously poor train service is not quite related to this one as it’s operated by serperate companies that cater to luxury holidays as opposed to business commutes.

As we have gathered, Scotland, Wales, Northern Ireland, and England all have something to offer, which can easily replace the excitement of a holiday abroad – all without the tension of cancelled flights and policy U-turns. You’re also likely to get great weather, particularly in the south of England during summer. Though, because it’s not a guarantee, it may be wise to avoid opting for a place solely because of the beach, and hedge your bets with some other activities too.