Russians will have long holidays in May 1-10 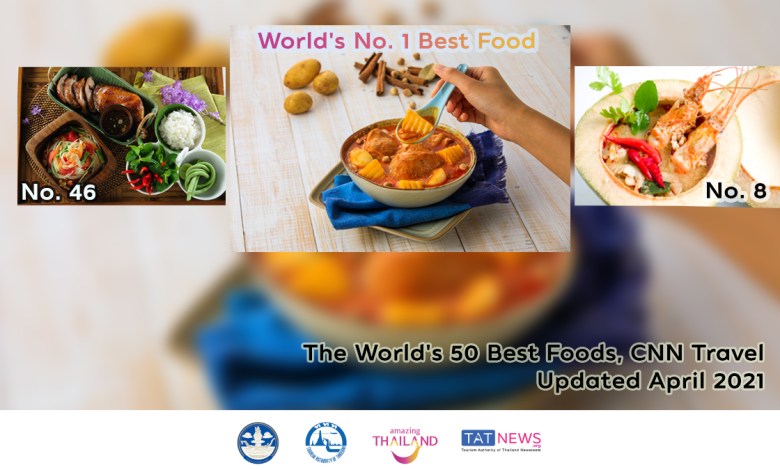 The Tourism Authority of Thailand (TAT) is pleased to announce that CNN Travel has once again ranked Thai Massaman curry as the No. 1 dish in the world’s 50 best foods list, along with Tom Yam Kung (Shrimp Spicy Soup) in eighth place and Som Tam papaya salad, which placed at 46th.

While travel to Thailand is limited at this time due to the ongoing COVID-19 pandemic, CNN Travel’s listing of three Thai dishes in the world’s 50 best foods is a testament to the already solid reputation of Thai cuisine that is increasingly perceived as a world-class culinary experience.

The latest CNN Travel World’s 50 Best Foods list was updated in April 2021, on the original article that was previously published in 2011, then reformatted, updated and republished in 2017, and updated since then.

In this latest update published on 14 April, 2021, CNN Travel staff once again said that they had scoured the planet for what they thought were 50 of the most delicious foods ever created.

The three Thai dishes were once again ranked and described as follows:

Emphatically the king of curries, and perhaps the king of all foods. Spicy, coconutty, sweet and savoury. Even the packet sauce you buy from the supermarket can make the most delinquent of cooks look like a Michelin potential. Thankfully, someone invented rice, with which diners can mop up the last drizzles of curry sauce. “The Land of Smiles” isn’t just a marketing catchline. It’s a result of being born in a land where the world’s most delicious food is sold on nearly every street corner.

To prepare Thailand’s most famous salad, pound garlic and chillies with a mortar and pestle. Toss in tamarind juice, fish sauce, peanuts, dried shrimp, tomatoes, lime juice, sugar cane paste, string beans, and a handful of grated green papaya. Grab a side of sticky rice. Variations include those made with crab (som tam pu) and fermented fish sauce (som tam pla ra), but none matches the flavour and simple beauty of the original.