Possible Expansion of the Travel Corridor Arrangement for Indonesian Tourism 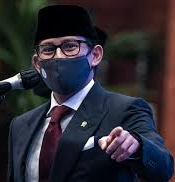 It has been discussed by the relevant Ministers in the Cabinet of President Joko Widodo “Jokowi” regarding the expansion of the travel corridor arrangement for the Indonesian tourism sector, which allows the return of foreign tourists (tourists) to Indonesia. The return of tourists is expected to be in line with the national economic recovery plan, especially for regions that depend on the tourism and creative economy sector, such as Bali Province. “This is a form of our commitment from the Ministry of Tourism and Creative Economy to follow up on the guidance delivered by the President yesterday, namely how Bali can prepare a reopening for foreign tourists in mid-June or July this year with various conditions,” said Tourism Minister Sandiaga Salahuddin Uno after conducting a coordination meeting with the Ministers, Wednesday (17/3/2021) in Bali. The press release from the Ministry of Tourism and Creative Economy further quoted Minister Uno as saying, these requirements consist of a controlled and continuously suppressed number of COVID-19, and increased compliance with health protocols, as well as enhancement and strengthening of the implementation of testing, tracing and treatment and vaccination in Bali which was targeted to reach the number. 2 million or more in July. Previously, the Bali Provincial Government had determined a pilot project in three areas designated as green zones, namely Ubud in Gianyar Regency, Sanur in Denpasar City, and ITDC Nusa Dua in Badung Regency. The zoning is intended to form zones with a healthy lifestyle and strictly implement standard health protocols during the COVID-19 pandemic with a comprehensive vaccination policy for people who live and have activities in the area. This is at the same time a precondition for the stages that will be taken to reopen the tourism sector when the pandemic situation is under control. Regarding the country’s target in implementing the travel corridor arrangement, Tourism Minister  said the determination would be led by the Ministry of Foreign Affairs. Among them are countries with high levels of vaccination, countries with strict application of health protocols followed by high testing, tracing and treatment, as well as countries with a reciprocal principle and other factors.   “We have already mentioned several countries such as the Netherlands, China, the United Arab Emirates or other Middle Eastern countries and Singapore. But the finalization depends on the travel corridor arrangement of each country,” said Minister Sandiaga Uno.”***