The UAE Covid vaccine could become a global leader, but we must see full data Sophie Zinser 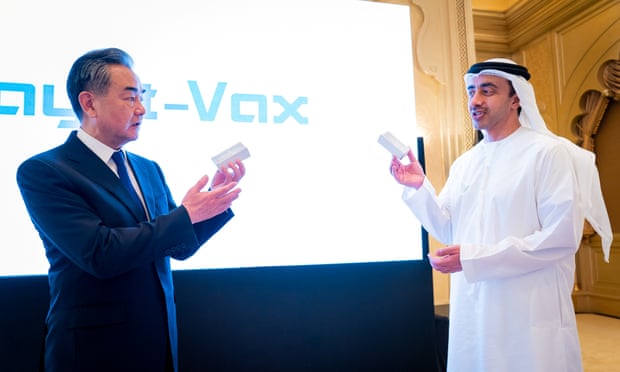 China’s leading vaccine just got rebranded. On Sunday 28 March, its major pharmaceutical company, Sinopharm, announced a new joint venture with G42, a UAE-based tech company: the vaccine is called Hayat-Vax, hayat meaning “life” in Arabic. The partnership shows immense promise as a new source of vaccines across the developing world.

But there’s a catch: a lack of scientific transparency in its phase III clinical trial data. A successful phase III trial is the golden seal confirming a jab’s efficacy once and for all. It allows scientists to observe possible side effects and make comparisons with placebo cases, while mirroring real-life conditions. From a scientific perspective, it provides critical evidence for developing future vaccines. But Hayat-Vax’s phase III data hasn’t been released.

Sinopharm has already released peer-reviewed phase I and II data in the Lancet. It proves the BBIBP-CorV vaccine – which has been administered to tens of millions of people – is indeed safe for use, but does not validate its efficacy rate. Last December, China announced that the Sinopharm vaccine is 79.34% effective based on what it dubbed “interim trial data” without releasing phase III results. This contradicted the UAE’s estimate of 86% for the same jab, leading to confusion over the vaccine’s actual efficacy. In Sunday’s announcement, G42 did not mention anything regarding Hayat-Vax’s phase III clinical trial data.

Still, renaming the jab in Arabic may be a smart move in the world of vaccine diplomacy: it distances the Sinopharm vaccine from its Chinese roots and epitomises China’s narrative of “neutral engagement” in the Middle East and North Africa. It may well help increase the jab’s international uptake, which so far has been mixed. Egypt, for example, kicked off its vaccine rollout in January using Sinopharm but, despite acquiring 350,000 doses, doctors, nurses and the elderly hesitated to take the jabs, citing concerns about its credibility. On the other hand, in developing nations where China’s role is less commercially significant – such as Jordan – scepticism regarding Pfizer’s efficacy as a “new type of vaccine” (it uses mRNA technology) and the AstraZeneca jab, despite data confirming their safety, have cast Sinopharm in a better light. Without peer-reviewed, phase III data citing its efficacy, Hayat-Vax’s domestic trustworthiness will in large part be determined by the political climate rather than the scientific community.

Commercial demand for the vaccine is definitely there, and likely on the rise. The global Covax initiative hopes to vaccinate only 20% of developing countries’ most vulnerable populations, leaving governments to seek remaining doses from private deals. Nations such as Honduras and Argentina are already striking private deals for vaccines such as Russia’s Sputnik V and the German-US Pfizer. Starting next month, the venture aims to produce 2m doses per month. Annually, it hopes to eventually meet targets of 200m.

The UAE has the geopolitical bandwidth to rebrand the Sinopharm vaccine partly because it is the world’s second most vaccinated country. Its push to manufacture vaccines is also part of larger ambitions to diversify local industry away from hydrocarbons. While the UAE is also trialling Russia’s Sputnik V, it was Sinopharm and G42’s partnership that made history last July when the two launched the world’s first phase III clinical trial of a Covid-19 vaccine in Abu Dhabi.

Publishing Hayat-Vax’s data in an internationally credible scientific journal may not seem like an urgent priority right now, but G42 executives should see this gap as a market opportunity. If Hayat-Vax definitively proves it is 79% effective, the UAE would become a leading player in nearly every country’s vaccine market overnight.

Both the UAE and China already have a soft-power advantage over western governments since they see developing countries as potential customers, rather than passive recipients of aid. A consumer-driven attitude, combined with a proven, effective, low-cost vaccine, may offer life for populations around the world. All it would take is some form of credible data. As China’s former chief food and drug regulator, Bi Jingquan, put it when he urged Chinese companies to share the phase III results: “With more data, the more transparency, the better.”