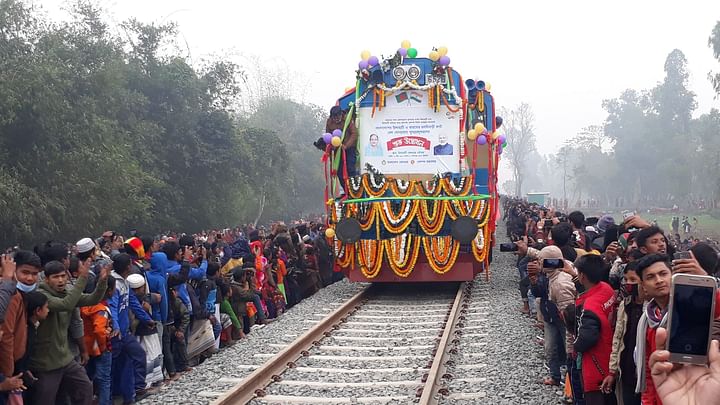 The new train to be launched between Bangladesh and India will be called ‘Mithali Express’. Prime Minister Sheikh Hasina has fixed the name. Now, if India agrees, the Dhaka-Jalpaiguri train will run by this name.

The new train is scheduled to be inaugurated by Bangladesh Prime Minister Sheikh Hasina and Indian Prime Minister Narendra Modi on March 27 to mark the golden jubilee of independence. It will ply from Dhaka’s Cantonthe railway station to New Jalpaiguri through Chilahati in Nilphamari.

The proposed name of the new train was announced by the railways on Sunday. Railway authorities say the train will run from both countries two days a week. Monday and Thursday from Bangladesh. It is proposed to run from India on Sunday and Wednesday.

Railway officials said four names were sent to the Prime Minister to decide the name of the new train—Mithali, Sampriti, Suhrith and Friendship. From here he chose the name Mithali. They feel that India will not disagree with this name.
Of the two trains running in India-Bangladesh now, dhaka-kolkata train is called Maitri Express, khulna-kolkata route train is Bandhan Express.

Railway sources said the inauguration on March 27 has created uncertainty about trains running since that day. Travel visas to India and Bangladesh have been blocked for a long time due to the infection situation in the karona. Railway officials do not think passengers will be available on the new train as a result. And tickets need to start selling 10 days before the train starts. But the fare rate is yet to be finalised.

When asked, Additional Director General (Operations) of Railways Sardar Sahadat Ali said in the first light on Sunday, “Proposals have been sent to India on train names, fare rates and revenue revenue. Everything will be known in a day or two. ’

A responsible railway official said in the first light that goods trains were supposed to ply after the inauguration of The Chilahati-Haldibari railway line on December 17. But it was not launched as traders interested in goods transport were not found. Now there is no opportunity to introduce passenger trains due to lack of passengers.

Railway sources said bangladesh does not currently have broad gauge train coaches. For this, it has been decided to introduce passenger trains with Coaches of India. India has agreed to give a train of 10 coaches free of cost. Bangladesh will run its own train if the coach is imported. A proposal for a possible fare rate and how much revenue a country will get has been sent to India. There will be three types of seats in the train. AC berth, AC seat and AC chair. They are offered rent rates of $44, 33 and $22 respectively.

The distance between Dhaka-Jalpaiguri route is 595 km. Of these, 526 km has fallen in Bangladesh. Considering the distance from Bangladesh, India has been offered a proposal to share the income from the train between the two countries. It said Bangladesh will get 85% of its income, 15% from India. The maitri express train also distributes income by distance. The distance of this road is 538 km. Bangladesh has 418 km. The rest is in India. Bangladesh gets 75 per cent of its income. India is getting 25 per cent.

Sources associated with the railway line construction project from Chilahati to the Indian border said passenger trains can be run with the infrastructure that is now in place. But modern stations, immigration infrastructure and open space adjacent to stations are needed. Land is being acquired for this. It is proposed to extend the tenure and cost of the project. This will increase the expenditure to Rs 143 crore.