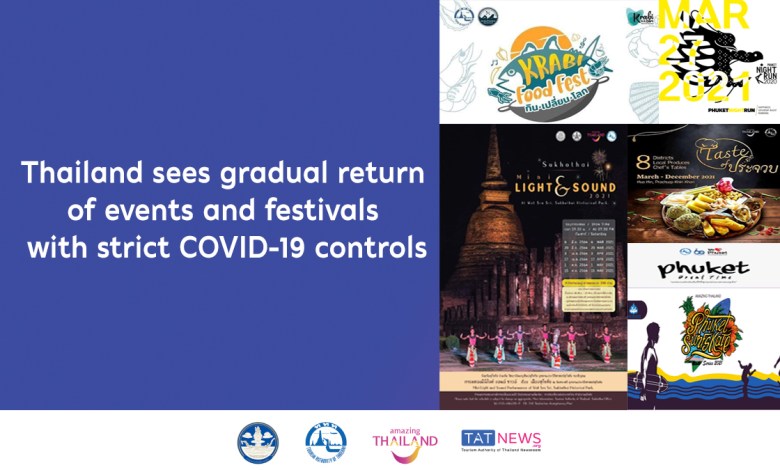 The Tourism Authority of Thailand (TAT) would like to provide an update regarding the gradual return of events and festivals with strict COVID-19 safety and control measures, as the country rolls out its first inoculation programme.

TAT Newsroom has compiled the following events and festivals, as they become available. However, due to the volatile situation, it is recommended to double check before making the decision to attend any event. There may also be new or returning events coming up at short notice.

Chon Buri: The ‘Light of Arts Interactive’ event is set for 26-27 March, in Pattaya, Chon Buri. The event features photo and painting exhibitions, 50 product and food booths, light-and-sound shows from the Pattaya Music Association, as well as a 4-D projection where photos can be taken inside a space in which realistic objects are projected with holographic cameras.

Sukhothai: The ‘Sukhothai Mini Light & Sound 2021’ show, which celebrates the history and prosperity of the Sukhothai Kingdom, an ancient Thai capital, will be held on subsequent Saturdays every two weeks at Wat Sra Sri inside the Sukhothai Historical Park. The shows are scheduled on 6 March, 20 March, 3 April, 17 April, 1 May, and 15 May, and are free of charge. Entry is limited to 200 people at any one time due to the COVID-19 prevention and control measures.

Surin: Local residents and visitors are promoting traditional culture while helping both the elephants and mahouts by COVID-19’s impact on tourism. They are doing so by dressing up in silk and Thai costumes and participating in activities with the elephants; such as, giving alms, feeding them, and walking under their bellies for good luck. Taking place each Saturday at the Phraya Surin Phakdi Sri Narong Changwang Monument. The event has been held since December 2020.

Prachuap Khiri Khan: The ‘Taste of Prachuap’ culinary extravaganza will take place in Hua Hin, Prachuap Khiri Khan, from March to December 2021 at selected restaurants, including Oceanside Beach Club & Restaurant (on 13 March, 18 June, 17 September, and 10 December), S.Ken’s bistro on 23 April, Tanya’s restaurant on 21 May, Eureka Beach Café on 10 July, and Duangkaew Cuisine on 14 August. The event involves Chef’s table-style dining on cuisine prepared by top local chefs using ingredients and produce sourced from eight districts around Prachuap Khiri Khan. The chefs include those who have appeared on the ‘Top Chef Thailand’, ‘Iron Chef Thailand’, and ‘Team Chef Thailand’ shows.

Krabi: The ‘Krabi Food Fest: Eat, Change Your World’ event is taking place from 12-14 March, at Ao Nang Beach with over 60 local restaurants from around the province in a celebration of Krabi’s food culture and Southern Thai cuisine. The focus is on healthy local dishes with the background story and seasonality of each told by ‘Iron Chef’ Thailand finalists Chef ‘Boom’ Kantyarat and Chef ‘Keng’ Rachawat. Celebrity host of Thailand’s popular ‘Food Work’ programme and winner of the Olympic food gold medal, Chef Boonsmith, will also be on hand to share secrets of Southern Thai cuisine. Featuring a ‘beach chic’ dress code requirement, the event will also offer tattoo demonstrations, live music, and sundowners. Visitors are asked to bring their own personal food and beverage containers.

Phuket: The second and third ‘Roi Rim Lay Phuket Festival’ will be held at Patong Beach on 19-21 March, and at Laguna Grove in Cherng Talay on 10-12 April. They are part of three large scale seafood festivals organised under the Roi Rim Lay banner, following the first festival held on 26-28 February, at Saphan Hin Park in Phuket Town, which featured over 170 stalls offering renowned local delicacies, freshly cooked seafood plus agricultural and tourism-related handicrafts.

The next events of the first-ever ‘Amazing Thailand Phuket Surfskate Series 2021’ are scheduled for 20 March at Kata Beach, 23 May at Karon Beach, 14 August at Patong Beach, and 13 November at Surin Beach. These follow the launch event on 20 Februar,y at Phuket Old Town, and promise non-stop action in this fast-growing street surfing sport. Meanwhile, the ‘7th Phuket Night Run 2021’ will be held on 27 March, with the programme featuring a 10.2 km Mini (Night) Run, 5.4 km Very Fun Run, and 11.6 km Ekiden Night Sprinter. The start and finish lines are at Saphan Hin Park.