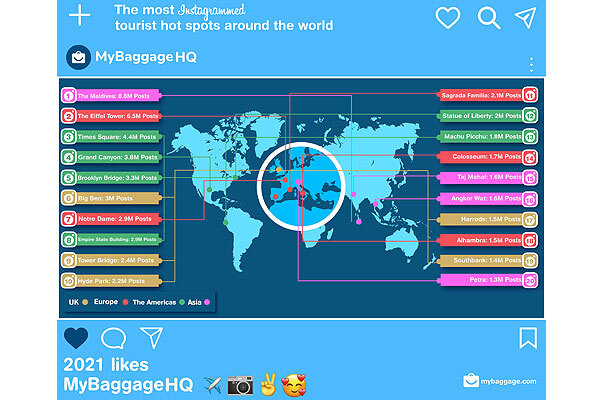 The most Instagrammed tourist locations in the world have been revealed – with the Maldives taking the top spot on the photo sharing platform.

Travel experts from My Baggage found the archipelago in the Indian Ocean, a firm favourite with social media influencers, had been tagged almost 9 million times with #Maldives.

Paris’s Eiffel Tower was found to be the second most Instagrammed tourist hotspot with 6.5 million hashtags while New York’s Times Square came in third with 4.4 million hashtags.

With more than 95 million photos uploaded on Instagram daily, the new research looked at the overall number of hashtags for tourist attractions.

The Maldives currently boasts 8.8 million hashtags and images uploaded to the photo-sharing website – more than any other tourist destination or attraction around the globe.

With limited options available for holidaying amidst the COVID-19 pandemic, the Maldives has become the destination of choice for many, including influencers.

While many holidaymakers decided to go on a staycation within the country, the Instagram profiles of many celebrities were filled with photos from their vacation in the Maldives, putting the island nation in the spotlight.

And the USA boasts the highest number of attractions from one country with Times Square, The Grand Canyon, Brooklyn Bridge, The Empire State Building, and The Statue of Liberty all featuring in the list.

Paul Stewart, Managing Director of My Baggage, said: “The Covid pandemic has brought about a new appreciation for travel. With various worldwide lockdowns bringing a halt to many holidays for Brits, a strong feeling of wanderlust is creeping in, with many of us eager to pack our bags and head to the next bucket-list destination.

“Naturally, with Instagram becoming the new photo album for travellers, many draw travel inspiration from this social platform, such as the Eiffel Tower in France. Whilst many of us wish we could visit France, we find ourselves in lockdown inside our homes. Whilst inside, we are using our phones more, and social media and digital usage has increased in the past year. 2020 has truly been a digital year as accessibility has improved and our desired holiday destination is just a click away.

“This got the team at My Baggage thinking, what are the most Insta-worthy destinations in the world right now? So, we researched the total hashtags of the top 20 tourist hotspots in the world.”