6 Gorgeous French Villages To Add To Your Travel List 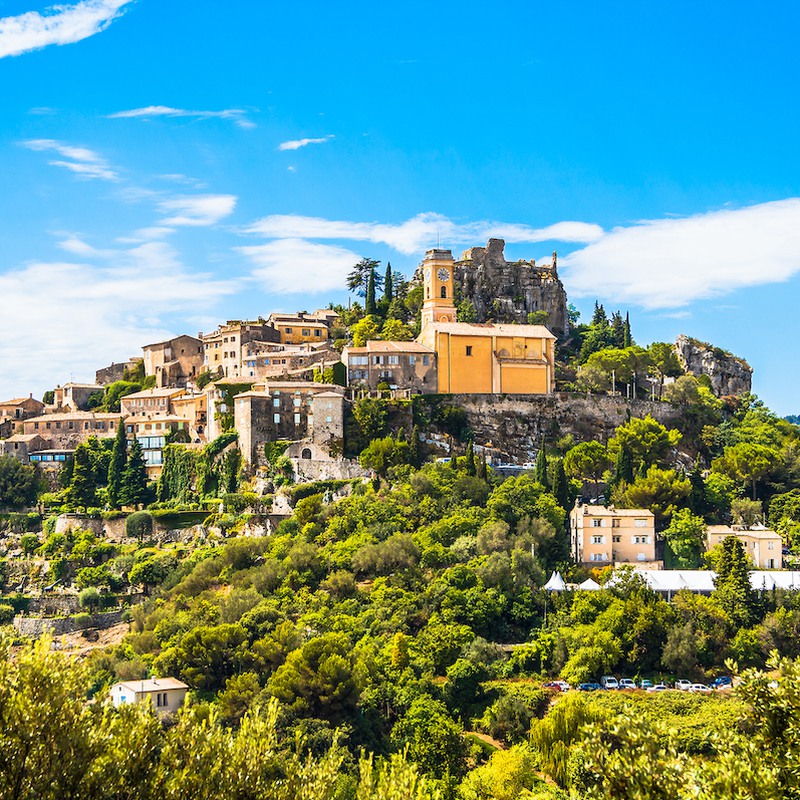 France has hundreds of villages and small towns that will transport you to a simpler way of life, rich with traditions that are sometimes hundreds of years old. From medieval fortress towns to seaside hamlets to hilltop villages with extraordinary views, you could spend a lifetime discovering them. Here, I’ve compiled a list of favorites in various parts of the country.

A seaside village in Normandy that has one of the most stunning landscapes in all of France, Etretat should be at the top of your list. The dramatic chalk cliffs, some as high as 300 feet, with three natural arches, make for jaw-dropping views you may not be able to take your eyes off. The rugged, natural beauty has been a magnet for artists including Monet, who painted a series of the cliffs at different times of the day and seasons, Eugene Boudin, and Gustave Courbet.

The last episode of the mega-hit French TV series Lupin takes place in Etretat. The series is based on the beloved novels from the early 1900s about a character named Arsene Lupin, a gentleman thief. The author of the books, Maurice Leblanc, maintained a house in Etretat, which is now a museum that hosts a tour of the eight stages of the story connected to its turn-of-the-century interior.

In Etretat, enjoy the freshest local mussels cooked in white wine and authentic crepes prepared with buckwheat flour at the many small cafes and seaside restaurants.

A special treat is the Etretat Gardens, an enchanting garden with intriguing stone sculptures scattered among the grounds and an exceptional view of the cliffs.

Pro Tip: There are a number of steep inclines in Etretat. Make sure you bring rubber shoes if you go to the beach, which has stones both on the beach and in the water.

Editor’s Note: Etretat makes our picks for Best Day Trips From Paris and 5 Idyllic Towns To Visit In Normandy, too.

Often cited as one of the most beautiful villages in France, Gerberoy is a hillside village in the mostly flat Picardie, an un-touristy region about 90 minutes from Paris.

In spring and summer, Gerberoy is a wonderland of flowers, gardens, and wisteria-festooned walls and doorways. The quaint half-timber houses and cottages with sloping brick roofs line the winding cobblestone walls in the pedestrian-friendly village.

In the late 1800s, upon advice from sculptor Auguste Rodin, artist Henri le Sidaner settled in Gerberoy, built a stately home, and planted an Italian style garden on three tiers of the property. Each tier is monochrome: the white flower garden, the red rose garden, and the blue garden. Today the gardens are open to the public.

Another lovely spot in Gerberoy is Du Jardin des Ifs, a former home converted into a restaurant and garden space. The enchanted gardens have elaborately sculpted topiaries in shapes like oversized hats, plus a separate herb and vegetable garden, and a circular pond. The owner Delphine Higgonet recently inherited the private property from her mother and has opened the gardens and the house to the public. The restaurant is seasonally opened from approximately April to October, with indoor and outdoor service, and it serves lunch and tea and cakes. Menu ingredients are locally sourced and some of the produce is from their own garden.

Close to the border of Spain in western France, the captivating village of Collioure lies in between a bay off the Mediterranean Sea and the rocky Pyrenees mountains.

In the late 1800s and early 1900s, Collioure was a big draw for artists including Picasso, Matisse, Andre Derain, Georges Braque, and Salvadore Dali. The Fauvism art movement was started in Collioure in the early 20th century because of its special light. There are 19 specific locations around the village with replicas of the original paintings that were painted on the sites, along with the view the artist captured. The Collioure Museum of Modern Art, inaugurated in 1930 by artist Jean Peske, exhibits works by Cocteau, Camoin, Pignon, Balbino Giner, and Descossy.

Local delicacies are anchovies (you can visit a factory where the anchovies are still hand packed in jars), the Crunchy Collioure, a cake prepared with either almonds or chocolate chips, and Banyuls, a sweet red wine with a high alcohol concentration.

There are a number of pebble beaches in Collioure (make sure to bring rubber shoes) and the water in summer is warm enough to swim in.

The centerpiece of the village is the Royal Castle, built in 673, which was updated in medieval times and the late 1600s and hosts various events during the year such as a theater festival, dance performances, and an antiques fair.

Other historic attractions to visit in Collioure are the Church of Our Lady of the Angels, built in 1684; a 14th-century bell tower; the oldest mill in the region from 1337; and the 2,100-foot high Madeloc Tower from the 13th century, which was a former signal tower with expanded views of the Roussillon coastline.

Less than an hour from Paris, you can be whisked away to Auvers-sur-Oise, the village where Van Gogh painted his last masterpieces before he died.

After leaving an asylum in Provence in 1890, Van Gogh wanted to be closer to his brother Theo, who lived in Paris, so he settled into a tiny room at an inn in Auvers-sur-Oise. His physician, Dr. Gachet, was also his patron and paid for Van Gogh’s expenses so he could paint freely without worrying about money. In the 70-day period before his death on July 29, 1890, the prolific Van Gogh turned out an astonishing 78 paintings. Many of Van Gogh’s most iconic paintings, including the Portrait of Dr. Gachet and The Church at Auvers, were painted in Auvers-sur-Oise.

Today, you can visit Van Gogh’s room at the Auberge Ravoux, and you can also dine in the restaurant on the main floor, which has a Van Gogh inspired menu. There’s also a theater in the same building which screens a short documentary about Van Gogh’s time in the village, plus a gift shop.

The Auvers-sur-Oise cemetery has a double tombstone for Vincent and his brother Theo, who died a few months later.

The Chateau d’Auvers is a gorgeous 17th-century chateau with a formal French garden with sculpted hedges. Also in town, the Absinthe Museum traces the history of the controversial and popular drink from the late 1800s, which was eventually banned because of its hallucinogenic effects on the drinker.

Pro Tip: Auvers-sur-Oise is an easy day trip from Paris and reachable by commuter train from the Gare du Nord station. For more on the town, consider How To Spend A Day In Auvers-Sur-Oise, France.

Towering 1,400 feet above the Mediterranean Sea over the Cote d’Azur in the south of France, Eze is the quintessential French village.

Be prepared to climb steep steps and pathways to get to the top. It’s absolutely worth it because, among other things, you will be rewarded with the Exotic Garden which has jaw-dropping 360-degree views and an extensive selection of cactus plants. Along the way, you can ease your climb by stopping at art galleries with works by local artists, gift boutiques, restaurants, and food shops and bakeries.

The Chapelle de la Sainte Croix, erected in 1306, is the oldest building in Eze; here the brotherhood of white penitents, who wore white robes, assisted victims of the plague.

Editor’s Note: Eze is one of Richard’s picks for 7 Perfect Day Trips From Beautiful Nice.

Colmar is a delightful village in the Alsace Lorraine area of northeast France, near the German border. The ancient district of Colmar is dotted with 14th-century half-timbered houses with facades painted in marigold, rust, periwinkle, soft pink, orange, and mint green with matching and contrasting wood shutters. Sometimes called the Venice of Alsace, Colmar has a network of canals through the old part of the town. In warmer weather, cruises in rowboats run up and down the canals, where you get a view of the backs of the houses, which are decorated with vines and summer flowers.

A historic 13th-century Dominican convent has been converted into the Unterlinden Museum, a showplace for gothic and renaissance art treasures.

The Toy Museum of Colmar has an extensive collection of over 1,000 toys from the 19th century to the present day.

Colmar is equally as wonderful in winter as in summer. The six Christmas markets are some of the best in the region, with wood huts selling local crafts, clothing, and holiday decorations plus mulled wine, grilled sausages, and cakes and candies. Other holiday attractions include choirs singing on illuminated boats drifting on the canals and an ice-skating rink in the center of town.

Pro Tip: Colmar is an easy 30-minute train ride from Strasbourg. If you plan to go, see Alaina Strollo’s tips for how to visit colorful Colmar.