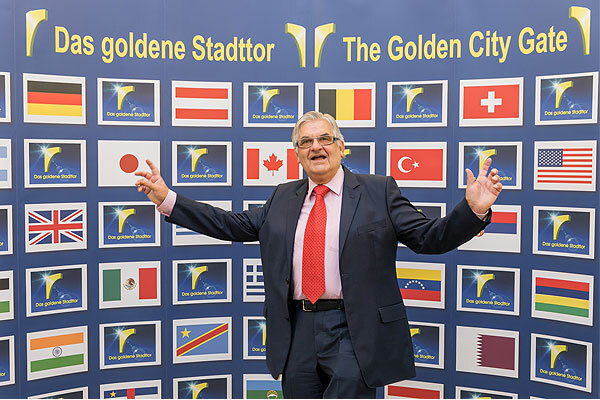 After 20 successful years at ITB Berlin, the international competition “The Golden City Gate” will also be held in 2021. The first contributions have already arrived and will be presented to the jury in February. The competition is therefore also presented at ITB Berlin NOW. The award ceremony of the “Golden City Gate 2021” is in the Hotel Estrel Berlin in connection with the show “Stars in Concert”. Sonnenklar TV will record and broadcast the concert and the award ceremony.

The “DGS Travel Forum” is new, in which, in addition to technical issues, an international travel market is being organized in the Estrel Hotel to help with a new start in tourism after Corona.

“We are therefore very close to travelers interested in tourism. The broadcast brings us to the living rooms of around 1.33 million interested people in Germany, Austria and Switzerland for the first time” emphasizes President Wolfgang Jo Huschert.

The competition “The Golden City Gate” has been honoring the creative multimedia work of the countries, hotels and regions for 20 years. The competition also gives clients, marketing departments and filmmakers the opportunity to deal internationally with the culture, emotion, creativity and design of the individual countries.

“Submit your videos and contributions to have your work recognized by the international tourism jury. Worldwide, the ministers, ambassadors, mayor producers are happy to receive the coveted “GOLDEN BEAR” from the hands of President Wolfgang Jo Huschert and his wife Ute. There are still 2 weeks until the jury meeting,” said Huschert.

DGS Tourism Forum 2021
After a little over a year of almost standstill in global tourism, things seem to get a little better again from March 2021 and to move towards normality. We will probably still have to live with certain restrictions, but thanks to the vaccination campaigns that began in January 2021, experts, doctors and virologists believe that the easing will be opened. That would mean light travel and the opening of hotels and restaurants.

The entire travel industry around the world is hoping and preparing for these days. The multimedia award “Das Goldene Stadttor”, which takes place every year as part of ITB Berlin, will also be held again in 2021 in the 21st year of its existence. After the virtual process last year due to the corona crisis, this year’s competition is to be held “live” gain. Together with the new strategic partner “Sonnenklar TV” the award ceremony will not take place this time as part of the ITB, as it will again only take place virtually in 2021, but in the Estrel Hotel Berlin.

In the largest hotel and event area in Europe – if the medical situation allows – the first “DGS Tourism Forum 2021” will be held in early summer, 2021.

In addition to a marketplace of tourism providers who present their products, countries, hotels etc. and find new contacts and customers, there will be specialist lectures and workshops on current tourism issues.

Wolfgang Jo Huschert, President of the Golden City Gate says: “With this event we want to give many of our friends and business partners from all over the world the opportunity to start again after Corona. At this first tourism marketing event at the end of the crisis, we are offering everyone interested to see each other live again and to meet existing customers and find new ones. The highlight next to the forum is the award ceremony for the “Golden City Gate”. This year it will take place as part of a small gala and will be broadcast by Sonnenklar TV.”

The best-known and largest tourist television station has a technical reach of 1.33 million viewers in Germany, Switzerland and Austria alone. In addition, many German and international specialist journalists will report on the forum and the award ceremony.

“Stars in Concert” from the eponymous show in the Estrel Hotel will “rock” the stage.