HOT SPOT The world’s best travel destinations according to TripAdvisor – and St Ives, Yorkshire and London all feature 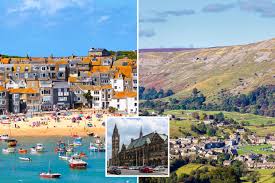 ST IVES in Cornwall has been named one of TripAdvisor’s Global Emerging Destinations in their 2021 Travellers’ Choice Awards.

York also featured among the top trending destinations, along with the Yorkshire Dales and London.

TripAdvisor has revealed their three annual awards – Popular, Trending and Emerging Destinations – as well as their new category National Parks.

St Ives came in fifth place for Emerging Destinations, and was the only UK spot to make the list at all.

The holiday destination, already popular with Brits due to its location on the Cornish coast, was beaten by the Caribbean island of Martinique, Panama City Beach in Florida, Brazil’s Armacao dos Buzios and Holbox in Mexico.

The Emerging Destinations list is based on the spots which travellers are saving to go to via TripAdvisor, particularly for after the pandemic.

TripAdvisor spokesperson Hayely Coleman explained: “These are destinations that travellers want to visit next – whether an existing tourism gem, or an off-the-radar spot not yet firmly on the map for international travellers.”

“It is no secret that St Ives is a well loved and long established tourist haven, with its picturesque harbour, beautiful beaches and buzzing art scene, but its place on this list shows just how much travellers are missing it and longing to visit again, once COVID-19 restrictions ease.”

The Yorkshire Dales also took a spot on the National Park award list, taking the title of the best in Europe and 11th on the list, while York itself ranked 22nd on the Trending Destination award list.

However, there isn’t good news for London, which was voted the World’s Most Popular Destination last year.

Now in second place, Bali in Indonesia has taken the top spot, voted for as the destination most raved about over the past 12 months.

London initially soared in popularity following the royal wedding of Prince Harry and Meghan Markle, according to TripAdvisor.

However, as the UK records some of the highest number of Covid cases in the world, the capital city has since dropped from the number one spot.

Following London is Dubai, which became popular with influencers and British holidaymakers until it was removed from the travel corridor list, Rome and Paris.

Edinburgh came in 23rd place, the only other UK entry on the list.