This picture taken on July 17, 2020 shows an Emirates Boeing 777-31H aircraft disembarking passengers upon arrival at the Iranian capital Tehran's Imam Khomeini International Airport. - The UAE's Emirates airlines landed its first flight in Tehran on July 17 after a five month shutdown due to the novel coronavirus pandemic. (Photo by - / AFP) (Photo by -/AFP via Getty Images)

Some preliminary information has surfaced indicating that Emirates Airlines is facing a two-week flight ban on Dubai-Hong Kong flights. Reportedly coming into effect from January 9th through to the 22nd, this would be the second action of its kind imposed on the airline by Hong Kong authorities. The first action of this nature took place in December.

The news so far

There has yet to be much information published on this latest flight ban. What little news is available comes via a Hong Kong aviation reporter Danny Lee, who writes for the South China Morning Post.

Lee posted the following message to Twitter indicating that Hong Kong health authorities have banned the airline from January 9-22: 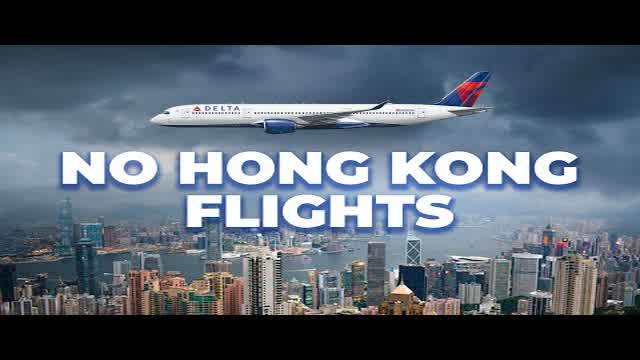 At this time, no other news has emerged of this ban, and Simple Flying has contacted both Emirates and Hong Kong’s Civil Aviation Department for statements on the issue.

The government had stated in December that it reserves the right to block a route for 14 days under specific conditions. According to CNN, two conditions are as follows:

The South China Morning Post noted the additional condition that could trigger a ban, in which an airline will be barred for two weeks if any travelers on a flight with a COVID-19-positive passenger fail to comply with Hong Kong’s pandemic control measures.

KLM, British Airways, and Emirates had been barred from operating flights to Hong Kong for part of December under these rules.

Even though official statements on the travel ban have yet to be released, Emirates’ website somewhat confirms this new restriction.

The airline’s Hong Kong destination page indicates that it is offering service to the East Asian city, saying, “We’re currently operating flights from Dubai (DXB) to Hong Kong (HKG),” while also indicating a daily frequency. However, an attempt to proceed with a flight booking any time before January 23rd and no results will be found.

The lack of available flights to Hong Kong can be seen in the screen captures below:

As we saw in December, this ban only applies to airline operations to Hong Kong and not flights departing the Chinese Special Administrative Region.

While some may think this is enough justification to stop service completely, Emirates appears to be going ahead with flights from Hong Kong to Dubai, thus operating aircraft with zero passengers on the outbound journey. This is likely because the airline is still able to pull in enough revenue through cargo operations as well as from passengers flying out of Hong Kong.

This is confirmed via the airline’s booking engine, which shows flight availability throughout the month of January.

Will you be affected by this new flight ban? Share your experience with us in the comments.