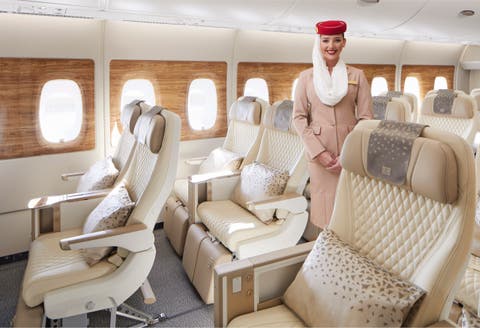 Following a couple of years of waiting, Emirates today revealed its new premium economy cabin to the world. The cabin sees the airline breaking from its signature three cabin interior. Alongside the new cabin, the airline has also refreshed its other cabins.

For over a year, we’ve been patiently waiting for the announcement of the new Emirates premium economy cabin. The cabin has remained a closely guarded secret, apart from the odd detail leaked by Emirates president Tim Clark in occasional interviews on the topic. However, the wait is not over, as the airline today revealed the cabin with photos.

Each seat naturally comes with inflight entertainment, accessed via a 13.3-inch screen. Rather than seatback tray tables, a wood effect tray table that extends from the armrest. If folded in half, it can be used as a cocktail table. Photos also show that the seats also have access to power sockets.

The new premium economy cabin is located at the front of the lower deck of the Airbus A380. It has two dedicated toilets for its 56 passengers.

Rolling the cabin out

The new premium economy cabin was delivered onboard Emirates’ latest aircraft delivered last week. However, it may take a while before passengers have a decent chance of trialing the new product. According to the airline, its five remaining A380s will contain the cabin when delivered over the next year and a half.

The airline also confirmed that some of its Boeing 777Xs would include the premium economy cabin  when deliveries commence in 2023. But what about the airline’s existing Airbus A380 fleet? It seems as though no firms have been made, with the airline commenting that it is considering plans to retrofit its existing fleet.

In the coming weeks, Emirates will reveal when the aircraft will fly and where. Clark said that the A380 would be deployed on various routes to allow many customers to experience its new travel class. However, with so few seats on offer, it doesn’t make sense to sell the cabin at the current moment in time. As a result, the premium economy cabin will initially be a complimentary upgrade for the airline’s most valuable customers.

Commenting on the class, Clark went on to say the following in a press release seen by Simple Flying:

“Our Premium Economy product was carefully developed in keeping with Emirates’ brand positioning as a full-service airline of the highest quality. Our First, Business and Economy experiences reset industry standards when they were introduced, and we are confident that our Premium Economy will also make its mark as a distinct premium offering.”

Stay tuned later today as we will delve into the other cabin upgrades offered on the new Airbus A380.

What do you make of Emirates’ new premium economy cabin? Let us know your thoughts in the comments!

Content Manager – Degree educated in Aerospace Technology, this certified pilot is a passionate specialist in European aviation. Working closely with British Airways, Lufthansa and others, Tom provides commentary on topical issues for outlets including the BBC. Based in Frankfurt, Germany.

December 29, 202
Previous articleEMIRATES ‘ PRESIDENT DISCUSSES RETIREMENT AND THE A380 FLEET
Next articlePattaya’s darkest hour has arrived