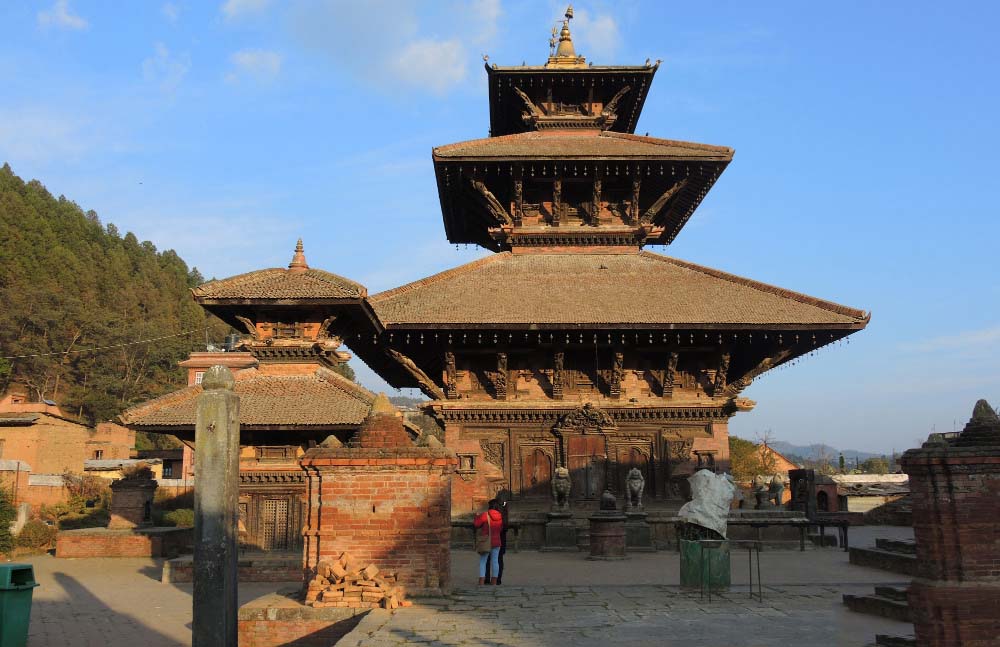 Most travellers to Nepal visit several of the country’s well-known UNESCO-listed World Heritage Sites. These are must-visit attractions that shouldn’t be missed, but they’re not the only worthwhile heritage sites in the country. There are currently 15 sites in Nepal that are on UNESCO’s tentative list. This means that although they’re not yet World Heritage Sites, they might be in the future. If and when they are added to the official list, they’ll likely attract a lot more visitors, so check them out now if you want a more peaceful experience and to be ahead of the game.

The temples at Panauti are located at the sacred confluence of the Roshi and Punyamati Rivers. The Indreshwar Mahadev Temple, a three-story pagoda, was built between the 13th and 18th centuries, and some authorities believe that the structure is the original one, never having been destroyed or rebuilt after any disasters. If this is true, it would be the oldest surviving pagoda in Nepal.

It’s easy to get to Panauti from Kathmandu, as it’s only a couple of hours’ drive away. There’s also a great homestay network in the town, which provides a charming alternative to hotels or guesthouses, and gives visitors an insight into local culture. THE ARCHAEOLOGICAL REMAINS OF THE ANCIENT SHAKYA KINGDOM

Just west of Lumbini, Tilaurakot is an archaeological site where the historic Kapilavastu was located, where Siddhartha Gautam Buddha spent many years. All that remains today is ruins, but travellers who are especially interested in Buddhism and ancient history will find this place interesting.

THE CAVE ARCHITECTURE OF THE MUKTINATH VALLEY OF MUSTANG

The valley between Muktinath (below the Thorong La Pass) and Kagbeni is home to some mysterious caves that are believed to have been meditation caves of ascetics who stayed here centuries ago. Little is known about them, but they’re undoubtedly of historical and archaeological importance, and worthy of preserving. THE MEDIEVAL PALACE COMPLEX OF GORKHA

Gorkha is situated in the Middle Hills countryside, just 24 kilometers from the Prithvi Highway connecting Kathmandu and Pokhara. The complex of Gorka Durbar is situated on a hilltop, high above the main part of the town. It is comprised of a fort, a palace, and a temple, all surrounded by an enclosure of fortified walls. Prithvi Narayan Shah, who unified the rival kingdoms of Nepal, was born here. THE RELIC STUPA OF LORD BUDDHA

Although it simply looks like a small, 7-metre high hill these days, the Ramagrama Stupa is a very important Buddhist site as it is one of the eight original places where the remains of Buddha were enshrined. It’s quite near Lumbini, on the banks of the Jharahi River. Archaeological excavations have found pottery, beads, bangles, and art objects from various periods of history.

THE VERNACULAR VILLAGE AND ITS MUSTARD-SEED OIL INDUSTRIAL HERITAGE

Khokana is a small town in the Kathmandu Valley that not so long ago was a rural village, but is now almost part of the capital’s urban sprawl. It’s an old Newari town near Kirtipur and Bungamati, with examples of Newari architecture. What it’s most famous for, though, is it’s mustard-seed oil. The oil produced here, using traditional methods, is exported all around the valley. Lo Manthang is a village in the restricted territory of Upper Mustang that used to be the capital of the Kingdom of Lo. Upper Mustang is considered to be one of the best-preserved examples of Tibetan culture in the world. Until 1992, foreigners were forbidden from entering the area, and they still require a special permit. The walled city area is a treasure trove of medieval Tibetan culture. VAJRAYOGINI AND EARLY SETTLEMENT OF SANKHU

Sankhu is a village in the northeastern Kathmandu Valley, and the Vajrayogini Temple is above Sankhu, on a hill. Although it’s a quiet place now, Sankhu was once on the main trade route to Tibet, so was a busy and important town. It suffered badly in the 2015 earthquake, but it is still a historically important place. THE MEDIEVAL SETTLEMENT OF KIRTIPUR

Kirtipur is another ancient Newari town on the southern outskirts of Kathmandu, west of Patan. The attractive old town area is located atop a hill, meaning it has great views looking north over Kathmandu, and to the snow-capped Himalaya when the sky is clear. There are a number of important and impressive temples here, and very authentic Newari food to try. Kirtipur is a very underrated spot, and it may only be a matter of time before more visitors to Nepal start coming here. THE RISHIKESH COMPLEX OF RURU KSHETRA

Located in Palpa District, the Rishikesh Complex is a very important Hindu pilgrimage site. It’s noteworthy because it’s mentioned in the Hindu epic texts, the Ramayana and Mahabharata. It’s an important cremation site, and many devout Nepali Hindus wish to be cremated here. Many architectural styles are on display here.

Nuwakot Fort was built by Prithvi Narayan Shah, the first king of Nepal as we know it today. Located on the ancient trade route with Tibet, Nuwakot was briefly the capital of Nepal. It’s now a bit out of the way, about three hours’ drive from Kathmandu, but the palace complex is spectacular, with its multi-tiered building with thick walls. THE RAM JANAKI TEMPLE IN JANAKPUR

Janakpur is religiously important to Hindus, as it is supposedly the place where Lord Rama’s wife Sita (also known as Janaki, hence the town’s name) was born. It is a pilgrimage site for Hindus from both Nepal and India, and much of the central area of town caters to Indian tourists,. The beautiful Ram Janaki Temple is a rare example of Hindu-Koiri-style architecture in Nepal, which looks like it would not be out of place in Rajasthan. THE MEDIEVAL TOWN OF TANSEN

Tansen, in Palpa District, is situated on a crest in the Lesser Himalayas, on the highway between Lumbini and Pokhara. Overlooking the Kali Gandaki Valley, the Newari town still has a charming medieval feel. Tansen is also known for its fine Dhaka cloth, the woven fabric that is used to make a lot of traditional Nepali clothing, such as men’s topi. The remote Sinja Valley in Far Western Nepal is an archaeologically and culturally important place, as it was where the Nepali language originated. The valley was home to the capital city of the Khasas, people who ruled the area between the 12th and 14th centuries. Archeological excavations have unearthed underground pipe systems and monoliths, as well as some of the earliest known inscriptions of the Nepali language in Devanagari script, in cliffs.

THE BHURTI TEMPLE COMPLEX OF DAILEKH

The Bhurti Temple Complex, in Western Nepal, is mysterious, as it’s not known exactly who constructed the 22 monuments here. The buildings bear a lot of similarities with those in the Sinja Valley (above), so they may be connected. It may also have been on the ancient Northern Route connecting the Gangetic Plains to Western Tibet and the Silk Route.