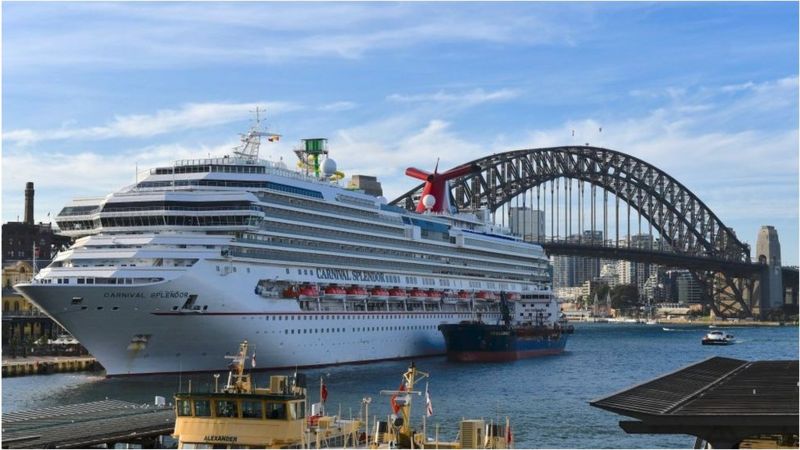 The boss of the world’s biggest cruise company has told the BBC new safety measures can help the $150bn (£113bn) a year industry to get going again.

The hugely profitable business has been brought to its knees by coronavirus after regulators around the world stopped ships from sailing to try and limit outbreaks.

Arnold Donald, the chief executive of Carnival Corporation, said “universal testing, which doesn’t exist in any other industry of scale” will help mitigate the risk of an outbreak.

He added that “additional medical screenings, physical distancing, mask wearing” could be among further measures.

However, there have been outbreaks of coronavirus on some of the few cruises that have set sail recently, including the Carnival-owned Costa Diadema which has been sailing in the Mediterranean Sea.

Mr Donald concedes that “you cannot guarantee that you’re going to be Covid-free no matter what regimen you put in place”.

Although, he insists, “it can be managed and managed effectively” and that collaborating with authorities around the world means that has been done “reasonably effectively” so far.

The company has drafted in a raft of health and scientific advisers to draw up its protocols.

Mr Donald says “our priority, of course, is to make cruising work in a way where we have every confidence there’s no greater risk than if you were engaging in similar activity shore-side”.

The difficulties of achieving that were laid out by the US Centre for Disease Control (CDC), which in lifting its ban on cruise ships, said that without mitigations “cruise ships would continue to pose a greater risk of Covid-19 transmission than other settings”.

Traditionally, cruising has a loyal customer base and that has given Mr Arnold grounds for optimism.

He says for the second half of next year “bookings have been robust. People really want to cruise when it’s safe to do so”. He adds “we’re cautiously optimistic we’ll be sailing in early 2021”, albeit a few ships at a time.

The financial imperative to get going again is clear.

Despite scrapping 18 of its 105 ships, Carnival is losing about $650m a month. After raising more than $12bn from investors, Mr Arnold says, “even if we had zero revenue, we could go through in to the summer of next year”.

Other than that the money has pretty much stopped coming in.

The summer is normally the busiest time of the year but from July to August Carnival brought in just $31m. None of that was from ticket sales, and it compares to $6.5bn in the same time last year, 68% of which was from tickets.

The lack of paying passengers reflects the huge uncertainty hanging over an industry that thrives on thousands of passengers at a time, travelling in relatively close confines, two things that have been severely restricted to try and control coronavirus.

According to Monique Giese, who tracks the shipping industry for the consultancy KPMG, the cruise industry is very much at the mercy of the virus.

She says “it is very difficult to give any forecast for the next year. The cruise industry is going to lose the very profitable winter season specifically in the Caribbean area.”

Test runs are amongst the strict conditions that have been laid out by the CDC before cruises can resume in the US.

It’s the most important market for the industry, accounting for nearly 50% of the 30m passengers who take a cruise each year.

The industry has voluntarily stopped sailings in the US until the end of year. However Congress is investigating whether or not the Trump White House interfered to stop the CDC extending the mandatory ban into next year.

President-elect Joe Biden has taken a markedly different approach to tackling coronavirus but Mr Donald says “we don’t have any concerns” that a new administration will lead to a new no-sail order and more financial problems.

Before the pandemic, the Cruise Line Industry Association calculated that its members supported 1.2m jobs worldwide, and when the US no-sail order was lifted its President Kelly Craighead said she was “confident that a resumption of cruising in the US is possible to support the economic recovery” whilst protecting public health.

However, ships are being scrapped by several lines, meaning that jobs will be lost. For those that remain, Mr Arnold says “it’s important to get people back to work”.