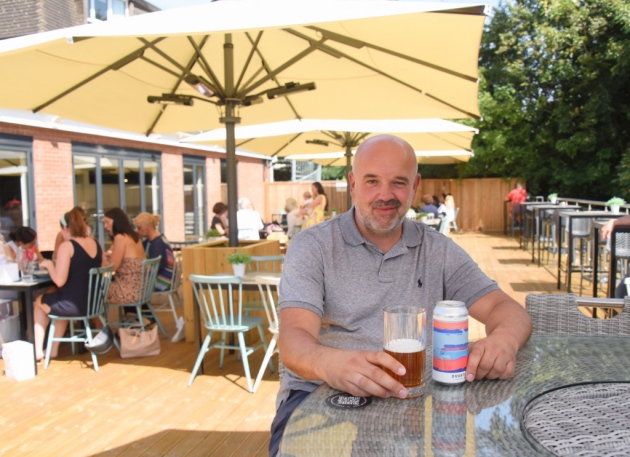 Tourism bosses have said holiday-makers have flocked to Norwich on staycations but fear the surge has been a “double-edged sword”.

Marcus Pearcey, owner of The Oaklands Hotel on Yarmouth Road, said guests on holiday had soared by 20pc compared to last year as a result of the pandemic and air travel restrictions.

He said: “From our point of view, the current situation has generated a lot more people staying on staycations, which is a massive advantage and we have reaped the rewards.”

In addition, he said a large portion of the guests were families on week-long breaks.

“It is unheard of and extremely rare for us,” Mr Pearcey said, “But we had lots because they had just given up travelling long distance or abroad.”

General manager of the Maids Head Hotel, Christine Malcolm, with the new capillary central heating system on the ceiling of one of the rooms. Picture: DENISE BRADLEY

He said: “Guests were asking us things like how to get a boat and the best restaurants. We noticed more than ever our local knowledge had come into play.”

But he described the boost in business as a “double-edged sword.”

Mr Pearcey added: “It doesn’t help when we go into lockdowns as it heavily off-sets what we have gained from an increase in UK visitors.”

He also warned the industry in the meantime could struggle to stay afloat, but was optimistic about Norwich cementing itself as a major destination for years to come.

Mr Pearcey said: “People have realised we are gateway – you can shoot off to North Norfolk or have a kid’s day in Great Yarmouth. They also love the Lanes and the Cathedral.

Customers at canoe hire business Pub and Paddle taking to the water at the Red Lion, Norwich. Photo: Steve Adams

“But I know many people who run hotels are struggling with rents and it is an underlying threat. If the lockdown was extended over January it would be catastrophic for hospitality.”

At The Maids Head Hotel in Tombland, general manager Christine Malcolm said she noticed a growing trend of “people treating themselves.”

She said the four luxury and eight junior suites were fully booked first, while many customers selected package options with extras.

Ms Malcolm said: “People seemed to be indulging themselves more, which was really nice. We’ve never had all our suites going first before.”

But while leisure customers increased, the inability to host group bookings due to coronavirus regulations, who largely go on heritage tours around the nearby cathedral, affected business.

You may also want to watch:

Ms Malcolm said: “Normally we would host as many as 50 to 60 people in a group for three to four days, but we could not accommodate these. We had lots of these group cancellations which affected total spend.”

She said government schemes including Eat Out To Help Out provided a vital boost.

Ms Malcolm added: “Where we lost massively was food and beverage as our restaurant could only operate at a 60pc capacity with the restrictions in place.

“We are also a wedding venue and obviously guest number restrictions, and the second lockdown, has had an impact.

“We were busy in August but then in September and October we were down on previous years.”

She said many of the guests had been attracted to Norwich due to its low number of coronavirus cases, but said it was “hard to say” if the city will continue to see a growth in tourism.

Nick Hanington, owner of canoe rental business Pub and Paddle, based at the Red Lion on Bishopgate, described business after the first lockdown as “intense”.

He said: “It did feel full-on between June and October going into a full season after lockdown.”

Like other tourism businesses across the city, Mr Hanington said there was a 10pc jump in guests from elsewhere in the UK compared to last year.

However, he said his business was fortunate that both lockdowns fell outside of peak months.

Mr Hanington added: “If we had a full lockdown for a full summer we would be out of business. We were very lucky the first lockdown eased up as our main season ended and the second lockdown began when it was over. It was timed well.”

“But we are a seasonal business and weather dependent, so you’ve got to be happy with the element of risk anyway.”

Mr Hanington predicted Norwich would remain a top staycation spot for the next 20 years.

He added: “I may be biased but it’s in the top five places to holiday in England – and it’s not going anywhere.”

Liza Dunnell, general manager, said St Giles Hotel in the city centre was fully booked from August until the end of October.

She said guest numbers had increased by 10pc compared to the same period last year.

“It was definitely not what we expected coming out of a lockdown,” Ms Dunnell said, “We thought it would be really quiet but it was nice to have life back into the hotel. It was a pleasant surprise.”

She added: “I think with everything going on staycations are here to stay. People want to feel confident and will continue to stick to where they know.”