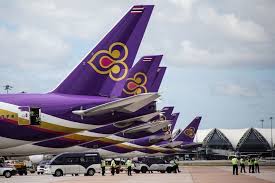 Anyone want to buy an airplane? In the midst of tackling bankruptcy, Thai Airways is auctioning off 34 old passenger aircrafts. The aircrafts are around 12 to nearly 30 years old and are sold on an “as-is, where is” condition.

The airline has been strapped for cash. As part of a debt rehabilitation plan, nearly 5,000 employees – a fourth of Thai Airways staff – applied voluntary resignation. (Basically, they’ve been politely asked to quit.) With a slowdown in travel due to the coronavirus pandemic, the company has been getting creative to make ends meet.

At their Bangkok headquarters, Thai Airways started selling their in-flight meals on the ground with “flight attendants” serving customers seated in repurposed airplane seats. The airline also started offering flight simulator packages to the public, which was typically only used for pilot training. The airline recently announced a special “heavenly” flight to take off on November 30. The plane will fly over 99 sacred sites in Thailand and passengers will chant Buddhist mantras while in the air.

Now, Thai Airways is selling their old aircrafts. Here’s what they’ve got: