Thailand: The Land of… 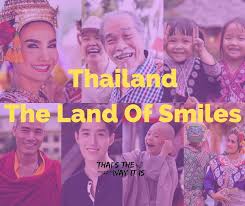 I’m sure, I’m not the only one who has been rethinking Thailand’s nickname The Land Of Smiles. According to Win Lyovarin, two-time S.E.A. Write winner and 2013 National Artist for Literature, Britisher David Lander, creative director at an ad agency, should be credited for coming up with the phrase. Lander came up with the slogan in a pitch for the Tourism Authority of Thailand. Fun fact: The Land Of Smiles is also the title of a German operetta, which premiered in 1929.

The phrase was indirectly brought to public attention earlier this week and, perhaps, it needs a reexamination to reflect what is happening in Thailand, at the moment. Here are a few of my suggestions for your entertainment.

The Land of Ironic Special Days

December 10 is Constitution Day. Throughout the 88-year history of Thai democracy, we have had 13 coups, according to most sources. Also, PM Prayut hasn’t completely ruled out the possibility of another coup in an interview last Friday but, in his defence, he said no one wants it to happen. National Children’s Day, the second Saturday of January, is more like a day to familiarise children with soldiers and tanks so they won’t be upset when the next coup inevitably comes. National Science Day is on August 18 but every day in Thailand is Superstition Day. Do I really need to talk about Loy Krathong?

The Land of Double Standards?

BMA urgently orders the BTS to increase service frequency due to concerns that the PDRC protests may worsen traffic  (Naewna headline from Jan 8, 2014).

The Land of Two Dictionaries

Reform means reform to some but it also means abolition to others. Loan means loan to some but can also mean income for others.

Does this mean the government will restrict our rights to play with ourselves by closing other X-rated websites, too? No Nut November, anyone?

Lonely Planet names 2021’s most eco-friendly trips and best community experiences, from the Rocky Mountaineer train to food in Greece and UK city tours by the homeless