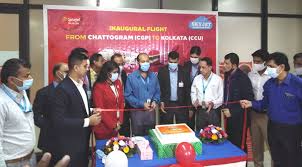 SpiceJet is starting its journey from the commercial capital Chittagong to neighboring India’s Kolkata route.

He said the launch of Spice Jet flight from Chittagong to Kolkata will benefit businessmen, patients, students and tourists. Passenger, cargo transport will increase.

According to sources, SpiceJet has joined this route as part of operating flights between Bangladesh and India under the Air Bubble Agreement. This is their 11th international destination.