Why do tourists keep vandalising the Colosseum 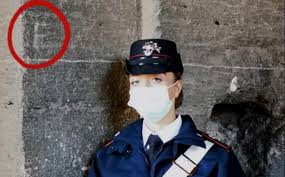 Colosseum defaced by German teenager.A 14-year-old German girl has become the latest person to deface Rome’s Colosseum.The teenager was caught by security staff as she used a stone to carve a large ‘E’, the first letter of her name, into a pillar on the ground floor of the ancient monument.The girl, who was travelling with her parents, was cited by carabinieri for aggravated damage to a site of historical and cultural importance.The incident is the latest in a string of other similar offences, and, while allowances could possibly be made for the girl’s youth, the same cannot be said for the majority of other acts of vandalism at the Colosseum, carried out by people far older than the 14-year-old.The last person to be caught carving his initials was an Irish man, aged 32, in mid-September. Days earlier, another tourist, a 40-year-old from Poland, crashed his drone inside the Colosseum despite being told explicitly not to fly it inside the amphitheatre.Italy’s battle with problem touristsHigh profile acts of vandalism at the Colosseum last year include an Israeli woman, aged 39, who decided to scrape the initials of her husband and children into the monument’s ancient walls; a man from Uruguay (32) who used a key to write ‘Juan’ on a Colosseum wall; and a Hungarian man (29) who engraved a letter ‘T’ as a memento of his visit.2015 was also a bad year for the Colosseum’s walls: an Austrian woman (40) used a Swiss army knife to carve the letters ‘M.D.S.’; a top Bulgarian footballer (33) engraved his initials; and two American women, aged 21 and 25, used coins to carve a “J” and an “N”, before taking a smiling selfie of their handiwork.Many of the tourists stopped by police claim they thought it was “all right” to add their mark to the graffitti (much of it ancient) already present on the monument’s walls.Which begs the question: will the message ever sink in that it is not all right to vandalise the Colosseum?