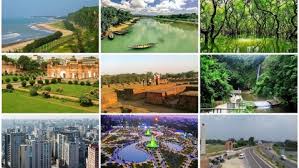 More than 200 days have passed since the first case of corona was identified in Bangladesh on March 8. And in such a context, today, September 26, World Tourism Day is being celebrated. Like other countries, the day is being celebrated in Bangladesh on a limited scale.
That is why in-bound tourism in Bangladesh is going through a very sensitive situation. For the first time in 2013-2014, the tourism industry in Bangladesh was affected due to strikes and arson by the opposition. Later, the horrific terrorist attack of Holi Artisan in Gulshan pierced the last nail in the chest of the burning tourist. After that, various tourist generating countries or source markets of the world issued Red Alert in Bangladesh. In other words, it is forbidden to send tourists from their country to Bangladesh. One by one, all the developed countries, from which mainly tourists come to Bangladesh, such as Britain, Germany, USA, France, Spain, Australia, Canada, New Zealand, Belgium, etc., stop sending tourists. Its horror lasted for several years. Then in 2016 another accident disrupted our inbound tourism. And that is the US-Bangladesh plane crash in Nepal. Although it happened in Kathmandu, Nepal, but since the airline is from Bangladesh, its remnants also fell on us. And the horror of Covid-19 or Corona coming in November 2019 surpasses everything. The tourism industry was completely shut down. And as a result, small businesses like ours are in dire straits.

Since January, many companies have been closed for about 8-9 months and many employees have been laid off. Many are again trying to adapt to new e-commerce-based professions. After 20-30 years in the same profession, this attempt to change the profession will not bring far-reaching benefits for the tourism industry. But you have to survive. The tour operators have not received any part of the incentive package announced by the Prime Minister. He is an in-bound, out-bound or domestic tour operator, whatever I say. However, the country’s in-bound tour operators are playing a positive role in bringing in foreign currency. At present, Bangladesh’s inbound tour operators, though small, have a small share in Bangladesh’s foreign exchange reserves of about 36 billion, it must be acknowledged. Surprisingly, even after declaring tourism as an industry and a thrust sector, the country’s in-bound tour operators do not get any kind of export incentive. Where crabs or crabs are exported but government-announced export incentives are available, in-bound tour operators remain neglected. However, one of the claimants of various types of tax rebates and tax-free vehicles declared by the industry are these foreign exchange earning tourism companies. There has never been a single instance of these in-bound tour operators being honored or welcomed.

Apart from this there are proper branding, marketing and promotional activities of the country. The government has been trying hard to manage all these activities with its limited capacity but it has never been enough. My point is, the Bangladesh Tourism Board has already taken initiatives to promote tourism in Bangladesh extensively on online and social media. The board is trying to reorganize the website and present it on the world tourism map in a more modern way. Virtual tourism fairs have come to the place of physical tourism fairs all over the world as the Corona period is now underway. Foreign tourists start their travel plans at least a year or two before visiting a particular place. So, if Corona runs marketing and promotional activities during this closed period, its benefits will be fully realized during the winter of 2012 and from 2022 onwards. Public and private tourism companies can conduct a number of activities during this leisure time. One of these is conducting online training activities on various topics and conducting awareness campaigns on tourism among the people living in remote areas of the country. If the local people are involved in tourism and their economic benefits are ensured, the country’s developing tourism industry will reap the benefits. One more thing that can be looked at is product identification and development.

Tourists of any age like to visit Bangladesh and I think it is most important to know what is the tourist product of their visit and pleasure here. For which it is especially necessary to have a full research branch of Bangladesh Tourism Board. For those of us who have been working in the field of in-bound tourism for a long time, we do not think that Millennials and Generation X groups will visit our country very often, as their average age is 24 to 56 years. Only those who are called Baby Boomers i.e. 56 to 60-70 years of age i.e. those who are called Experience Traveler or Senior Citizen in the language of tourism, choose Bangladesh to visit at this moment. I met a 94 year old female tourist in Bangladesh. Another thing is that none of them is the first place to visit Bangladesh. In other words, after traveling to almost all the countries in the region, a senior tourist thinks of visiting Bangladesh. I met a tourist last year, whose 134th country was Bangladesh. As a result, their preferences are different. They are more interested in seeing the people and their diverse lives and lifestyles than just the traditional tourist spots. A smiling housewife in the village or work to eat

How Can Private Jet Make Your Business Trips More Efficient?