Cox’s Bazar will start a revolution in tourism industry and economy: Railway Minister 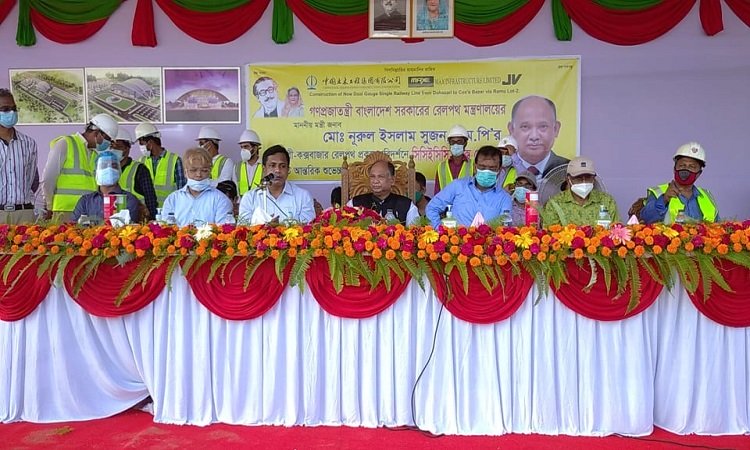 Railway Minister Md Nurul Islam Sujan said Prime Minister Sheikh Hasina is working on a plan to make Cox’s Bazar a full-fledged international tourist city. If the railway service from Dhaka to Cox’s Bazar starts, a revolutionary change will take place in the tourism industry and economic sector of the country.

The Railway Minister made the remarks at a brief function after inspecting the Cox’s Bazar Railway Station, Dohazari-Cox’s Bazar dual gauge railway construction project area under implementation on Saturday (September 12).

Meanwhile, the minister inspected the progress of work at various places including Jhilangja Hajipara and Ramu Fatehkharkul in Cox’s Bazar Sadar. He also expressed satisfaction over the progress of the railway station under implementation and appreciated the activities of the district administration.

Speaking on the occasion, the minister said the project would be completed by June 30, 2022 and the train service from Dhaka to Cox’s Bazar would be resumed. Prior to that, the money of the victims will be transferred regularly. No one affected will be left out of compensation.

After the speech, Railway Minister Nurul Islam Sujon handed over compensation checks worth Tk 1 crore to five landowners affected by the project.

Earlier, Railway Minister Md Nurul Islam Sujan arrived in Cox’s Bazar on Friday (September 11) on a two-day visit. He arrived at Cox’s Bazar Airport on a private plane at 11am. In the afternoon, he held an exchange meeting on land acquisition for the Dohazari-Cox’s Bazar dual gauge railway construction project. After inspecting the progress of the ‘Railway Construction Project’ on Saturday, the Minister left for Chittagong Circuit House by road in the afternoon.