Bangladesh will not visit Sri Lanka on condition 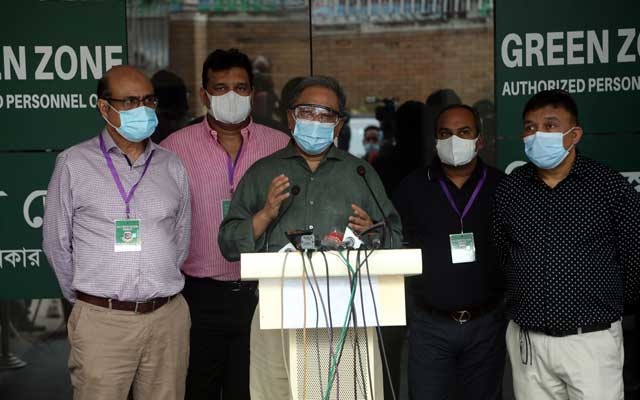 Nazmul Hasan told the media about his decision after a discussion with some directors of the BCB at the BCB on Monday afternoon.

“We want to give them a message, the terms they have given, it is rare in history. Test championship is not possible with it. This is the message I want to give them. Then if they say, ‘Let’s talk’, we’ll see what can be said or where to relax. However, it will not be played in this condition. ”

The Bangladesh team is scheduled to travel to Sri Lanka later this month to play a three-match Test series. The Bangladesh High Performance (HP) team is also going to go with the national team. Going there, the Bangladesh team will be able to start training from the third day, subject to being negative in the coronavirus test, such was the discussion for so long. But the SLC sent a letter to the BCB following new instructions from the Sri Lankan Department of Health. There are 14 days quarantine and various conditions are mentioned.

The Bangladesh team will not have enough time to prepare for the Test series if they have to quarantine for 14 days. The BCB president made it clear that Bangladesh will not compromise here.

“What we thought before and the letter they received yesterday is not even close to it. Some things are completely new to us. In many countries, quarantine is being done for 7 days, still being able to practice among themselves, being able to use the gym. According to what Sri Lanka said yesterday, no one will be able to leave the hotel room for 14 days. You also have to eat and drink at home. ”

“Our team is supposed to be there in Dambulla, not Colombo. That place is isolated. Can’t get out of the room there, we’re surprised. Secondly, what usually happens is that when you go on tour, you give a thrower to throw the ball, you give a net bowler, you give it whenever you go to any country. They are not giving it either. I understood that it is okay. But don’t let us get out of here. I don’t understand what they mean. This is not a boy’s game, it is an ICC Test Championship match! ”

The Bangladesh team had planned to go to Sri Lanka with a contingent of 75 people including cricketers and support staff of the national team and HP team. They also have to play matches to prepare for the Test series. But Sri Lanka has again stated that no more than 30 people can be included in the squad for the tour. Nazmul Hasan is not thinking how this tour is possible.

“We have to take 6 out of 30 net bowlers, throwers, security, medical team, everything. Then I can’t take the cricketer! They said they had a good coronavirus situation there. That’s why we planned to take a big squad. Not allowing me to practice now. Where our cricketers have not been in the game for six months, I can’t go there and practice, it doesn’t happen. ”

“Thinking about this, we decided today that we will let them know that there is no similarity between our thinking and their reality. It is not possible to play Test championship under any circumstances, given what they have given. Then let’s see what they say. ”

The Sri Lankan board has decided to organize the Sri Lanka Premier League soon. That is why the question of whether the interest in visiting Bangladesh has decreased was also raised in the press conference. Although the BCB chief did not give a direct answer, his words contained many answers.

“I don’t know how they will do LPL. The Sri Lankan government cannot handle any of our parties. So how do you handle so many franchises! ”

The BCB chief also said that he has no idea about the position of Sri Lanka after the letter from the BCB. Bangladesh will not move from its position, he said.

“I hope to get their answer tomorrow. Should be available tomorrow. Or they may talk to someone, it will take time I can’t say that. ”

“We started thinking about our program. I also said today. We will move forward. The sooner they report, the better. Once we make a decision, we will not give up. ”