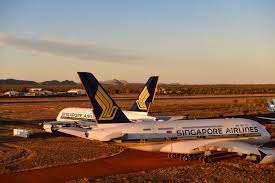 What routes no longer have first class?

Singapore has preemptively decided to stop selling first class tickets on a variety of routes across the world for the next year, thanks to low demand and to keep the aircraft that have first class cabins in storage. These bigger aircraft that have the premium offering are not as fuel-efficient to operate as the carrier’s newer, first class-free aircraft, like the Airbus A350.

Initially, the carrier had suspended sales of first class tickets only until March 2021. However, it now seems that this suspension may last a bit longer, although perhaps not across the entire fleet.

Singapore has decided to adjust the availability of first class seats from the 1st of April 2021 onwards, lasting the whole summer of 2021. As first class tickets were suspended entirely until March 2021, it is more a case of what routes will have it than not. These routes have the A380 and Boeing 777-300 family operating them, but the first cabin is blocked out.

Simple Flying reached out to Singapore Airlines for comment on this news. The airline told us,

“Due to potential aircraft deployment changes, FCL sales have been suspended for most Singapore Airlines routes through March of 2021. Sales will reopen when flight schedules that include  B777-300ER or A380 aircraft deployments are confirmed.”Advertisement:

There are two ‘first-class’ options when it comes to Singapore. Onboard the A380, there are six to twelve first-class suites (depending on configuration) that offer a completely private cabin and a separate lie-flat bed. Regular first class is only available on select Singapore aircraft, namely the Boeing 777-300ER fleet, and retrofitted into Boeing 777-300 aircraft (in a 1-2-1 configuration).

The carriers newer aircraft, the A350 and Boeing 787 don’t have first-class and only business. This is despite the planes offering long-haul flights to similarly distanced locations.

Singapore Airlines typically deploys these aircraft on flagship routes between Singapore and world cities such as Bejing, London, Paris, Sydney, and more. For the New York route, the airline operates the Airbus A350-900ULR aircraft (as it is best suited to do the distance). This plane doesn’t have first class, but nor does it have economy (only premium economy and an always sold-out business cabin)

Previous articleUS to no longer limit international arrivals from certain countries to 15 airports
Next articleKodaikanal is now open for tourists; e-passes required