Railways will run in Cox’s Bazar in 2022: Railway Minister 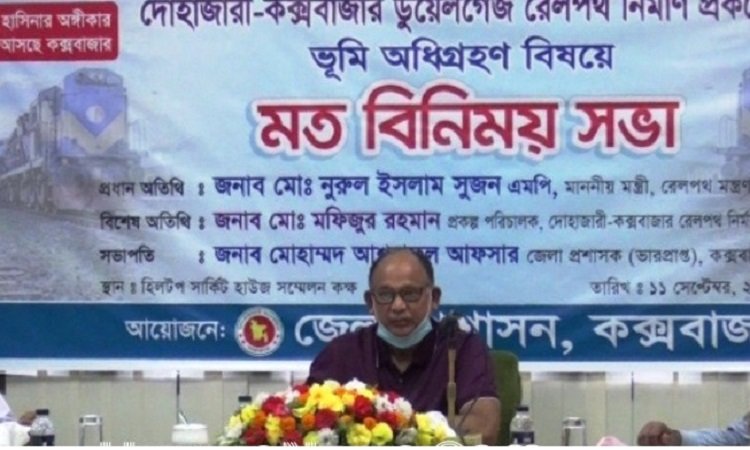 If the work goes ahead as scheduled, the Dhaka-Cox’s Bazar train service will start in 2022 and the government is working towards that goal, said Railway Minister Md. Nurul Islam Sujon.

He said the process of compensation for land acquisition for the Cox’s Bazar-Dohazari railway construction project was in its final stages. The transfer of compensation will be completed by abruptly ending the parts that have complications. Necessary directions have been given for this. After that, the construction work of Dohazari-Cox’s Bazar railway will be completed in June 2022. If the work goes ahead as scheduled, the Dhaka-Cox’s Bazar train service will start in 2022 and the government is working towards that goal.

The minister was speaking as the chief guest at an exchange meeting on land acquisition for the Dohazari-Cox’s Bazar dual gauge railway project at the Hilltop Circuit House conference room on Friday (September 11) afternoon.

In a meeting chaired by Acting Deputy Commissioner Md Ashraful Afsar at the initiative of the district administration in Cox’s Bazar, the Railway Minister further said that the picture of Cox’s Bazar will change once the construction of Dohazari-Cox’s Bazar railway is completed. Changes will come in the communication system. There will be a revolution in the economic field as well. Along with the increase in tourists, ordinary people will also be able to enjoy the benefits of travel.

It may be mentioned that Railway Minister Md. Nurul Islam Sujan came to Cox’s Bazar on Friday (September 11) on a two-day visit. He arrived at Cox’s Bazar Airport on a private plane at 11am. In the afternoon, he held an exchange meeting on land acquisition for the Dohazari-Cox’s Bazar dual gauge railway construction project. On Saturday (September 12) morning, the Minister is scheduled to inspect the progress of the ‘Railway Construction Project’ and leave for Chittagong Circuit House by road in the afternoon.

Previous articleBreaking out of the silo: How hotels can redefine commercial success
Next articleTODAY WOULD’VE BEEN THE DAY BALI REOPENED TO INTERNATIONAL TOURISTS