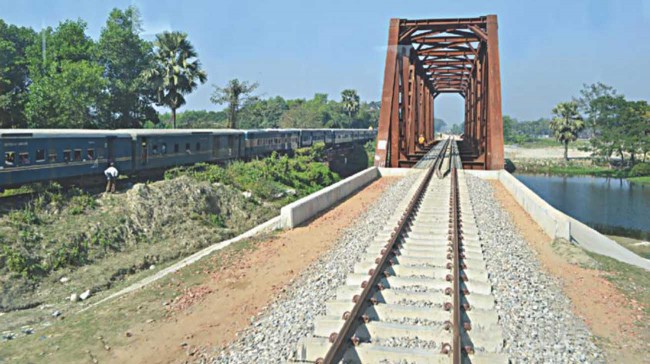 The cost and duration of the construction work of the third and fourth dual gauge railway tracks on Dhaka-Tongi route and doubling the dual gauge track on Tongi-Joydevpur route is going to increase further.

Officials cited redesigning of a major bridge under the project, Covid-19 pandemic, and the difference between the contract value and Development Project Profile (DPP) prices as the reasons for the changes.

They said the project authority was redesigning the Tongi Bridge as objections came from Bangladesh Inland Water Transport Authority (BIWTA) about the existing design — particularly about the clearance under the bridge.

Following the redesigning, the clearance under the bridge would increase by about two metres.

Bangladesh Railway is implementing the project under the first Indian Lines of Credit to improve the capacity of its most vital section. Except for Narayanganj, Dhaka is connected with the entire country’s railway network through this section.

But the delay in implementing the project — mainly for finalising the design, appointing the consultant and complexity over the tender process — forced the project authorities to revise its deadline twice and cost once.

The Ecnec had approved the project in November 2012 setting the cost at Tk 849 crore and deadline at June 2015.

The deadline was deferred twice — June 2019 and June 2023. The project cost went up to Tk 1,106 crore mainly due to changes to the design, and rise in prices of construction materials.

However, the BR in July 2018 signed a contract with Indian companies Afcons and Kalpataru Power Transmission Limited (KPTL) for implementing the project at a cost of Tk 1,393.78 crore, an increase of Tk 287.78 crore than the amount mentioned in the revised DPP.

Meantime, the BIWTA in November 2018 changed the categories of several rivers at different points in a bid to save those and increase their navigability. The organisation upgraded the category of this point of the Turag river to second from third, meaning the clearance under any bridge to be built there should be higher.

The move came after the project contractors had started the construction work.

To construct a bridge across a river, any authority has to get consent of the BIWTA for both horizontal and vertical clearance. The vertical clearance refers to the distance between standard high water level of a river and the main navigation span of a bridge.

The construction work of Tongi Bridge under the project remained suspended since April last year following objection from the BIWTA.

Project Director Afzal Hossain said, “The problem has been solved. The Prime Minister’s Office helped solving it. Now the clearance under the new bridge would be two metres more than the existing bridge and the BIWTA has given consent to it.”

He said they would revise the project again as the contract value was higher than the DPP cost. Besides, they were redesigning the Tongi Bridge and its adjacent portion and thus the cost of the project would rise slightly.

“The exact figure [cost escalation] will be known after completion of redesigning, which is expected to be done within this month,” Afzal told The Daily Star yesterday.

Till August, the project has witnessed 35.5 percent progress.

Previous articleTaj Mahal to reopen after 6 months, cap of 5,000 daily visitors
Next articleTickets for the Taj Mahal will be available online only, Agra Fort is opening