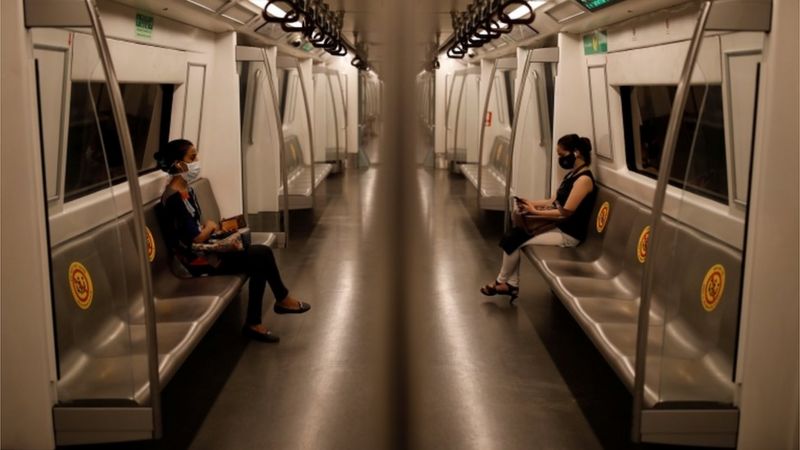 It’s India’s largest rapid transport system – it carried 2.7 million passengers a day before the lockdown.Masks, social distancing and temperature checks are mandatory according to the new rules.The move comes as case numbers continue to climb in India, with daily tallies of more than 80,000.The country has so far reported more than 4.1 million cases, and 70,000 deaths.Despite the risks, India continues to reopen because the economy is still reeling from the effects of a prolonged lockdown.At least 12 other metro services across the country are also reopening today.

Delhi has reported a recent uptick in cases and fatalities after the numbers dipped briefly. But the city has been steadily reopening, with bars set to open next week.The metro, however, is especially risky given the volume of passengers, and the fact that it covers large swathes of the sprawling capital.But officials have released detailed rules to curb the spread of the virus.

For one, the 389km (247 mile)-long metro will open in a phased manner over the week, eventually servicing all 285 stations.The yellow line, which connects 37 stations between north Delhi and the satellite city of Gurgaon, is the first to reopen. It’s the oldest line and also the busiest, with a daily footfall of around 1.45 million.In the first phase starting Monday, trains will run for four hours in the morning, beginning 07:00 IST, and for four hours in the evening, ending at 20:00 IST. Service hours will be extended from Friday onwards.Passengers will be allowed to sit on alternate seats or stand, maintaining adequate social distancing, according to the rules.

The trains will stop for an increased 10-20 seconds at stations to allow passengers sufficient time to board and alight without crowding around the doors.The coaches are expected to be warmer than usual as more fresh air will be pumped in from outside to ensure increased air circulation and prevent the spread of the coronavirus.Only a limited number of station gates will open to avoid a rush of passengers – stations usually have four entry and exit gates.

Some 800 people will be deployed at all stations to “ensure the cleanliness and orderliness inside stations”, and to regulate entry and exit of passengers, Metro officials said.All passengers will be screened and have to sanitise their hands before entering the stations. Forty five stations have been provided with machines, which will screen commuters and sanitise their hands. Masks will be provided to passengers not wearing them.Metro authorities say the concourse, passages, platforms, stairs, escalators, hand rails and toilets will be disinfected every four hours.

Only passengers carrying smart cards that can be digitally recharged will be allowed to travel. Many passengers used plastic travelling tokens before the lockdown.Trains will skip stations in areas with a high number of coronavirus cases, and where commuters are violating social distancing norms, they added.”If we find that resumption of operations is not resulting in social distancing, then, we might have no option but to review these arrangements,” Minister for Housing and Urban Affairs Hardeep Singh Puri said recently.