Biman freighter plan shelved due to pandemic fall out 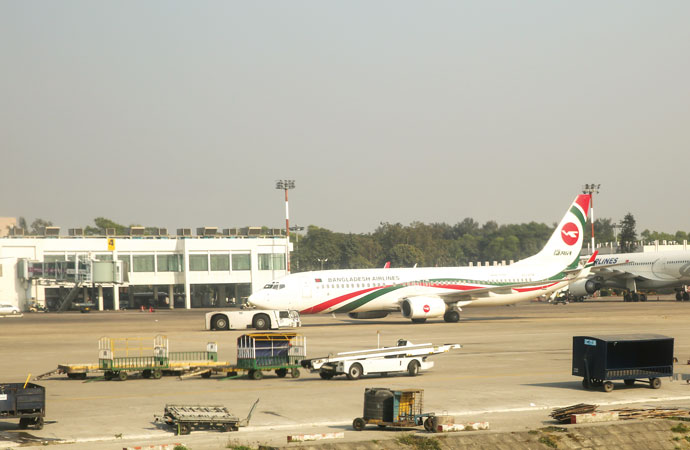 According to the Biman sources, the airline operates two regular cargo flights each week – to Hong Kong and Guangzhou

Biman Bangladesh Airlines recently began using passenger aircraft to transport freight but plans to buy freighter aircraft have been shelved due to fallout from the Covid-19 pandemic.

Plans to increase the size of the Biman fleet from 21 to 50 aircraft by 2030 have also been put on hold, according to a top official of the national flag carrier.

Flights to several countries are still not operational due to travel bans in the respective countries to control transmission of Covid-19. As a result, Biman have converted some of their passenger aircraft into full cargo flights to meet some of the shortfall, said the Ministry of Civil Aviation and Tourism Senior Secretary Mohibul Haque.

These converted cargo aircraft, with the passenger seats removed, are not being used in compliance with the Civil Aviation and Authority of Bangladesh (CAAB) guidelines, he added.

According to the Biman sources, the airline operates two regular cargo flights each week – to Hong Kong and Guangzhou.

In April, CAAB sent a report to the ministry after reviewing international cargo services, recommending the purchase and operation of cargo flights as well as with which countries they could be operated.

In December 2019, Prime Minister Sheikh Hasina had announced that the government would purchase cargo aircraft for the aviation industry in order to boost it and make it a profitable sector.

According to International Air Transport Association (IATA) data, the global demand for air freight transport in cargo ton-kilometres (CTKs) slumped 17.6% year on year in June, but this still represents a recovery from the 20.1% drop in May.

In the regional base freight traffic market, European airlines recorded a 27.6% year-on-year fall in international cargo volumes in June, up from a 29.5% drop in May, while North American carriers reported a decrease of only 8.8% year-on-year in June, the smallest contraction of all regions.

Asia-Pacific airlines saw demand for international air cargo slump 20% year-on-year in June, down from an 18.8% drop in May.

As of April, according to Biman data, there was a fall of around 94% in export cargo and 80% in import cargo due to the pandemic.

Export Promotion Bureau (EPB) data up to July states that Bangladesh exported goods worth $3.9bn in July, up by 44.4% compared to May.

Biman CEO and Managing Director (MD) Mokabbir Hossain said: “We are now operating on a charter basis for cargo. Due to the reduction in passenger flights, we started cargo flights from the beginning of the pandemic.

“We are operating two regular cargo flights to two countries each week, but there is a high load of chartered cargo flights” he added.

“We have a plan to buy freighters, but the situation is not favourable due to the ongoing pandemic. Still, there is a huge demand for cargo flights. Not only Biman, there are not any airways that can buy aircraft or freighters in these times,” Biman CEO further said.

CAAB Chairman Air Vice Marshall Mofidur Rahman said airways are now staying afloat by operating cargo flights. If the situation does not change rapidly, cargo services will be the main source of income for the aviation sector.