What Is The Shortest Regular Commercial Flight? 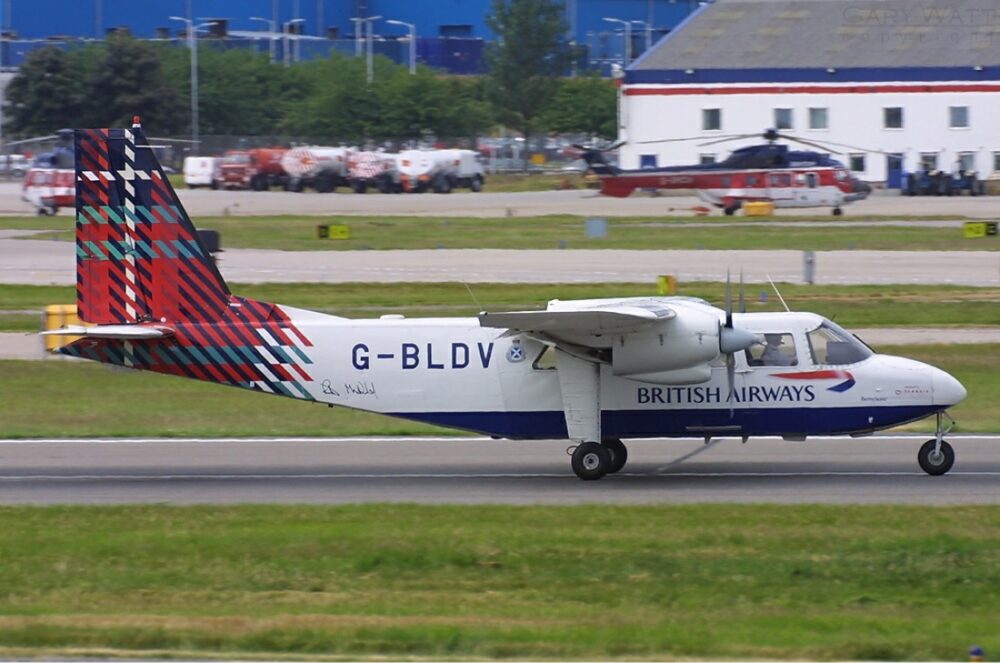 Short-haul flying is making up the bulk of passenger traffic this year due to the ongoing travel restrictions across the globe. With the world becoming smaller for at least the time being, here is a look at the world’s shortest regular commercial flight. This 1.7 mi (2.7 km) trip between Westray and Papa Westray, which are two of Scotland’s Orkney Islands, can be over even before a minute has passed.

For over half a century, Scottish carrier Loganair has been connecting these two small islands. It uses two of its Britten-Norman BN-2 Islander propeller aircraft for these quick trips. Only a single pilot heads the cockpit, but there is also another seat at the front that remains unoccupied. In total, up to eight passengers can fit in the plane’s cabin.

Loganair advertises this journey to be just 90 seconds. However, on occasions, the flight has been as short as 47 seconds, depending on tail wind. A one-way ticket for this service can be bought for as little as £7.50 ($10). However, general economy fares are presently going for £17 ($22.50).

Even though this flight may seem like a novelty operation, it provides essential connectivity for those living in the area. This flight is part of the Orkney Inter-Isles Air Service, which links the Orkney mainland with six outer islands. These islands are Eday, North Ronaldsay, Papa Westray, Sanday, Stronsay, and Westray. Altogether, locals, teachers, doctors, police officers, and business people make use of this network.

All the flights across the region are noticeably short compared to most commercial services. For instance, the short trip between the fields of Eday and Kirkwall only takes 10 minutes to complete.

According to Business Insider, Loganair CEO Jonathan Hinkles said the following about the importance of this service:Advertisement:

“The Orkney Inter-Isles Service is a jewel in our network and famous across the world. However, despite its fame, it’s also an essential life-line service for the people of Orkney, connecting the individual islands via a convenient air-link.”

Meanwhile, according to CNN, former Loganair director of flight operations Andy Thornton, said the following about the passengers that fly on this service:

“This route is used mainly by the people of the Orkney Islands going about their daily routines. It is used by teachers, the local police officer, the banker and children going to school. However it is also a keen route for tourists and aviation enthusiasts.”

The schedule shared by Loganair currently shows that LM0702 leaves Westray every Monday at 09:02. Along with this, LM0709 departs Tuesdays, Thursdays, and Fridays at 09:52. Additionally, LM0714 flies out on every Wednesday at 10:00, and LM0720 takes off every Saturday at 08:54.Advertisement:

Meanwhile, on the way back, flight LM0705 departs Papa Westray every Monday at 15:52. Additionally, flight LM0711 takes off from the island on a Tuesdays, Wednesdays, Thursdays, and Fridays at 16:22. LM0726 also departs weekly on Sundays at 16:22.

Looking into the future

Loganair has been planning ahead and looking to keep its operations up-to-date across these sparsely-populated islands. By next year, the airline wants to introduce electric planes to these operations.

These types of aircraft would suit these flights considerably as they would perform well on such short distances. Additionally, many locals would welcome this modernized update.Advertisement:

However, there could soon be less need for regular air services between the Orkney Islands. Last decade, consultations began to construct fixed connections between seven of the islands. If plans go ahead, Westray and Papa Westray would be connected by a land bridge.

Additionally, ferries also transport cars between the islands 13 times a day in each direction. The total time for each trip takes approximately 25 minutes. So, the addition of sturdy bridges could offer a well-rounded solution for those trying to get around the isles.

Nonetheless, as it stands, this service is the shortest regular commercial flight in the world. Other operations compare to this trip, such as the world’s shortest international commercial flight, which is a 10-minute journey from Sint Maarten to Anguilla.

Moreover, there are, of course, ultra-short irregular flights across the globe. For instance, Papua, Indonesia, often sees a 1.3-mile flight from Kegata to Apowo in a Pilatus PC-6 Turbo Porter.

Some flights hold records for the shortest time in a particular aircraft. Notably, Canada’s Air Creebec’s service between Fort Albany and Kashechewan is the quickest scheduled Dash 8 operation. This six-mile trip takes 10 minutes, but the flight itself usually takes between three and five minutes.

Altogether, the service between Westray and Papa Westray has become a staple in the Northern Isles of Scotland over the decades. Regardless of what the future of travel holds, it has left a legacy in the region. The operation has even developed a fanfare over the years, with several tourists hopping down to jump on this record-breaking flight.

The global health crisis has forced several airlines, including Loganair, to rethink its routes. The carrier has been trialing out different approaches amid the current conditions. Nonetheless, services linking these remote isles still look to remain in action in some capacity for the near future.