Vistara Launches New 787 Yoga Safety Video – How Does It Compare? 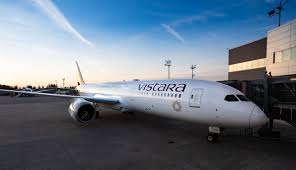 With the arrival of no less than two shiny new Dreamliners, Vistara has got its first international flights under its belt and is eager to do more. To celebrate this milestone, the airline has invested in an equally shiny new safety video to play onboard the 787.

Vistara’s safety video features an Indian yoga instructor, delivering all the essential safety advice while also ensuring we all know how to relax. Pictured in a variety of different beautiful locations around India, including Kerala, Karnataka and Meghalaya, Sanchitha Poonacha successfully achieves a fantastic mix of information delivery and destination salesmanship. Check it out below:

The safety video has become a staple of the modern airline, particularly for full service, long-haul carriers. Vistara’s mix of high-quality direction, clear instructions, and stirring excitement for the destination is a perfect balance. In our opinion, it’s beautiful and effortlessly Indian. But how does it compare to some of the other great safety videos of our time?

Despite barely operating any flights since its launch, Starlux was quick to kick off its mission with a glitzy safety video. The airline’s creation was released before any of its flights took off and might have you wondering whether you’re on a commercial flight or about to jet off into space.Advertisement:

It’s very sci-fi, very funny and keeps you watching. That, in essence, is what a safety video needs to do.

Dear old Virgin America (God rest its soul) delivered a classic back in 2013, with a catchy little number that promises to be an all-day earworm. If you’ve never experienced the #VXSafetyDance before, give it a whirl below.

Directed by Jon Chu and starring no less than 36 dancers alongside American Idol finalist Todrick Hall, it’s a Glee-esque delight that got everyone rocking. Within 12 days of its release, it racked up six million views on YouTube. Sadly, this didn’t change the fortunes of the airline, which operated its final flight in April 2018.Advertisement:

If you prefer your safety videos a bit more down to earth, British Airways’ 2017 video, in collaboration with Comic Relief, is a slice of star-studded comedy genius. Watch as celebrities, including Gordon Ramsey, Rob Brydon and Ian McKellen, audition in front of comedian Asim Chaudhry, as Chabuddy G, for a coveted part in the video.

Again, the message comes across strong, and Rowan Atkinson doing some classic Mr Bean at the end is pure comedy gold.

There are so many other awesome safety videos out there. Honorable mentions go to the Lego Movie tie-up from Turkish Airlines, United’s Spiderman offering, and the K-Pop wonder from Korean Air. If you still need more, take a trip around the best of Singapore with the beautiful Singapore Girl and Singapore Airlines.

Is the best delivery human?

Of course, not all airlines use safety videos. Some prefer to stick with the traditional and often more personal method of getting the flight attendants to deliver the information. It’s a tried and tested method of making sure everyone is up to speed, and if all safety demonstrations were as hilarious as this one, we’d be sure to pay attention every time.