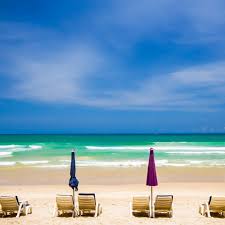 Once upon a time, it was enough to hope for sun, sea and sand from a beach break. Now, not catching or spreading a deadly disease tops the agenda. In the hopes of addressing potential travellers’ aspirations and anxieties while responsibly reopening its borders to tourists and the money they bring, Thailand is exploring a programme it is calling “Safe and Sealed”. Sexy the name is not, but neither are the realities of life during coronavirus, so we’ll let it slide.

Last month, the Bangkok Post reported that the Tourism and Sports Ministry was preparing to introduce the Safe and Sealed plan in six regions, with Phuket getting the green light “in principle” to be the test destination, from the beginning of October. Visitors will be able to fly into the southern province, where they will have to quaran­tine for 14 days at a designated resort.

These quarantourists will be tested for Covid-19 on their arrival and be allowed to travel within 1km of their hotel, before being tested again before their 14th day is done. Anyone wishing to stay in for longer or venture further afield in the country will have to quarantine for an additional week and pass another test at the end of that stint, after which they will be deemed safe and be permitted to break the seal and continue on their merry way.

Which Phuket hotels or resorts will be selected for the scheme is yet to be announced, although CNN Travel reported that the area around Patong beach was being considered. One of the first results to return from a Google search for “Patong beach” is, “Is it really that bad?” – but at this point, we’re so starved of travel we’d take wherever we are given.