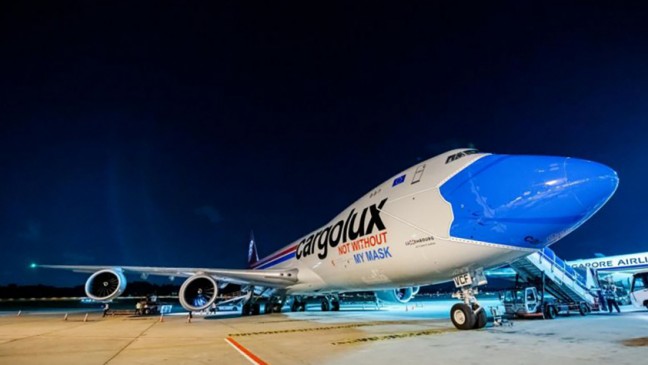 The blue mask is a common sight these days but on Thursday (August 27) morning, it was spotted on a Cargolux Airlines Boeing 747-8 at Changi Airport.

Flight CLX 7952 landed in Singapore “masked up”, four months after mask-wearing was made compulsory for those here on April 14 to combat the spread of Covid-19.

The special livery covers the nose of the plane with straps highlighting a message appropriate to current times: “Not without my mask.”

It is the first time a “masked” plane has landed in Changi, said Changi Airport Group.

The Luxembourg-based cargo airline had decided on a new paint job following a scheduled maintenance check in Taipei.

It made a stopover in Singapore at 4:20am on August 27 before heading to Luxembourg via Baku, Azerbaijan.

Luxembourg’s Prime Minister Xavier Bettel and Deputy Prime Minister François Bausch were onsite to greet the plane and its crew when it landed in Luxembourg Airport on August 27 afternoon local time.

In a statement, Cargolux said that the plane’s livery is meant to show that the airline “embraces the Luxembourg government’s campaign to promote the use of face masks in the current environment”.

The plane returned to Singapore on August 28 at about 9:00pm.

Previous articleEurope Travel Ban: US Covid Cases Still Too High, What You Must Know
Next articleAqua Expeditions unveils its newest vessel Aqua Nera