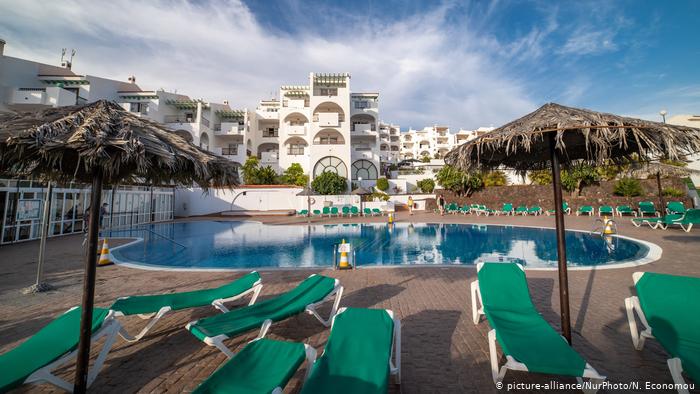 The season is over and a million jobs are at stake,” says Juan Carlos Higueras from EAE Business School in Madrid, summing up the current situation in Spain.

Officially, Spain currently has the most new infections per 100,000 inhabitants in Europe and travel warnings keep coming in from other countries.SOCIETY | 09.06.2020

So far only 55,000 Spaniards have officially lost their jobs because many workers are still covered by short-time work programs. But a study by the FEDEA business association predicts that 70% of employees in the tourism sector will lose their jobs.

What a difference an ocean makes

Especially hard hit are the Balearic Islands in the Mediterranean Sea, where tourism contributes 35% of overall income. By comparison, tourism accounts for around 12% of gross domestic product (GDP) in the rest of the country.

For Mallorca things look bleak: “The exaggerated scaremongering of some German media has made the situation worse,” criticizes investor Matthias Meindel, who lives on the island part time.

AUDIOS AND VIDEOS ON THE TOPIC

All videos, audios and galleriesAdvertisement

Anger mounts as Spain is again caught by surprise

However, he does not let it get to him or his planned hotel for cyclists in the town of Inca. “We will start the renovations next year,” he told DW.

Increased police patrols and closing beaches and parks at night are meant to curb the spread of the virus. Mask requirements have been in place for a long time. Now even those smoking in public need to keep a distance of two meters.

The locals adhere to the regulations with iron discipline. “You can’t always say that about tourists,” says Meindel. In addition, you can only enter Spain if you have previously filled in an extensive digital questionnaire.

On the other hand, the Canary Islands in the Atlantic Ocean, where youth unemployment is particularly high, currently have an advantage in the short term. Not only are they excluded from most travel warnings because of the low level of COVID-19 infections, now the German tour operator TUI is redirecting some of their Spanish trips there. On top of that, the main tourism season for the Canaries is in winter.

Trying to get by on ‘safe tourism’

It is clear that Spain’s economy has to reinvent itself. The government now wants to work with consultants to mold the entire vacation sector toward a model with fewer visitors yet larger margins.

After the record year 2019 with almost 84 million foreign tourists who left €92 billion ($109 billion) in the country, the industry association Exceltur expects a minus of almost €100 billion in 2020, a hole that is €15.6 billion bigger than previously thought.

The “Safe Tourism” (turismo seguro) quality seal recently issued by the country’s Ministry of Tourism aims to relieve holidaymakers’ fear. It guarantees hygiene protocols and a low risk of infection.

“Under this umbrella in the Castilla-La Mancha region, we primarily promote wine and gastronomy routes, hikes and open-air events,” reports Ruth Ardyla, head of the Madrid tourist office for the autonomous Spanish region whose main attraction is the city of Toledo.

But what Castilla-La Mancha is experiencing on a small scale applies to the whole country: Despite diligent efforts, tourists are staying away. “Previously 40% of our visitors were foreigners, now it is perhaps between 15-20%,” Ardyla told DW, adding that the future was more uncertain than in any other EU country.

In 2019, almost 2.4 million people worked directly or indirectly in the holiday industry in Spain, an increase of 500,000 new jobs in 10 years. Now, with only a third the number of foreign visitors, it’s increasingly hard to keep them employed.

How that should be financed is unclear, though. According to Banco de Espana, the country’s national debt rose to 110% of GDP in June and could be 120% by the end of the year.

Rebuilding the economy with Africa in mind

While the German lawyer Tim Wirth, who lives in Mallorca, was happy that King Felipe and Prime Minister Pedro Sanchez recently stayed on the island thus generating positive international press, “the sudden panic has now also had a negative impact on the real estate market,” he told DW.

According to the Spanish property appraisers Tinsa, house prices have fallen by an average of 8.2% on the Balearic and Canary Islands and by 6.1% on the country’s Mediterranean coast since March 2020.

To stop that, the Spanish economist Javier Diaz-Gimenez advises not to lose sight of the rest of the economy and to finally build more energy efficient houses and buildings: “The construction industry is just as important to us as tourism,” he says in an interview with DW.

Spain must therefore look to Africa, where the country can contribute with its world-renowned infrastructure companies like ACS and Ferrovial. “The continent is currently a central topic in my classes,” admits Diaz-Gimenez, who teaches at the IESE business school in Madrid.