Egypt upgrades Giza Plateau to attract tourists back to Pyramids 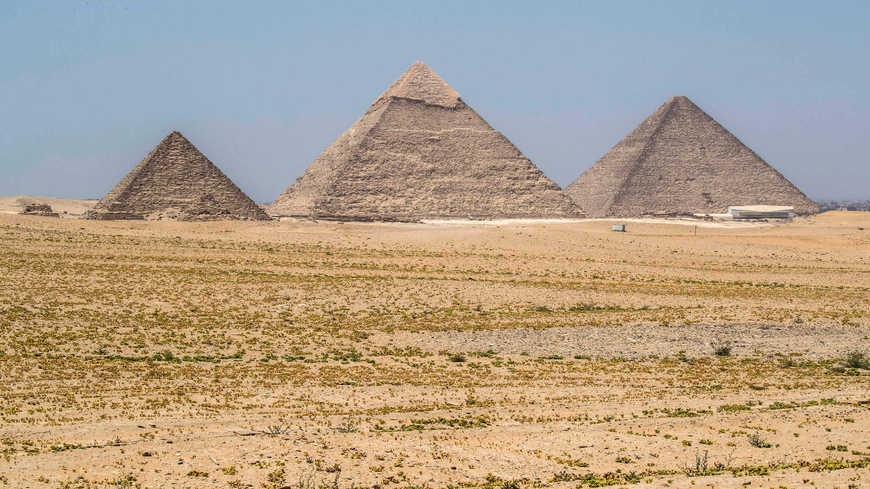 Construction engineers and workers have almost completed the first restaurant at the Giza Plateau, where the Great Pyramids of Giza and the Sphinx are located. It will serve tourists visiting the plateau, the epicenter of Egypt’s ancient civilization.

Those visiting the restaurant — an unostentatious structure decorated with simple furniture and tables, but potentially serving the most authentic of Egyptian cuisine — will have an uninterrupted view of the Great Pyramids of Giza, the Sphinx and other sites on the plateau.

Customers will also see the landscape behind the Pyramids, including the vast populated space making up the Pyramids district and the desert hinterland surrounding this millennia-old site.

The restaurant is part of a major development project in the area, one aiming at bringing the Giza Plateau back to its past glories, tourism planners say.

“The project aims to bring the plateau back to the attention of international tourists,” Ahmed Idriss, a member of the Egyptian parliament’s Committee on Tourism and Civil Aviation, told Al-Monitor. “It also aims to protect this precious site.”

The Giza Pyramids have been at the center of Egypt’s tourism promotion plans for decades, given the importance of the site for Egypt’s history. A sizable number of the tourists visiting Egypt come to the Pyramids to get a glimpse of the gigantic structures and the greatness of their builders.

However, the site lacked essential services making the development project a necessary move. The project started in 2009 and should have been completed in 2012. But the security and political turmoil that swept through Egypt in the aftermath of the 2011 uprising against longstanding President Hosni Mubarak halted it. Work on the site resumed in 2017.

The project includes the relocation of the entrance to the plateau and ditching the old entrance outside Mena House, a hotel dating back a century and a half that was constructed by Khedive Ismail and hosted a long list of international celebrities, including Winston Churchill, Richard Nixon, Agatha Christie, Frank Sinatra and King Saud of Saudi Arabia.

A new entrance has already been constructed in the desert to ease the entry of tourists coming to the area from downtown Cairo through the Ring Road, a 30-minute drive from the center of the Egyptian capital.

The new desert entrance will also make it easy for tourists arriving in Cairo from the new Sphinx International Airport, west of Cairo, to reach the Pyramids in just a few minutes.

The upgrade of the plateau will make the new entrance a gateway into a totally different world — one into history. It leads to a building constructed over 4,000 square meters (1 acre) and equipped to receive visitors to the area and prepare them for what they will experience next.

The Visitors Center contains windows for tickets. Once visitors buy their tickets, they are allowed into an area that contains a cinema that screens films and materials about the history of the Pyramids and their builders, and gives them information about the area in preparation for the tour they will make.

The center also has a library with a large number of books and manuscripts about the ancient Egyptian civilization.

“These facilities aim to prepare the visitors for what they will see once they are inside the plateau,” Ashraf Mohieeddine, a senior Ministry of Tourism and Antiquities official and the director-general of the Pyramids area, told Al-Monitor.

Tourism authorities are also constructing 18 bazaars inside the center that will showcase a wide range of goods from replica antiquities to traditional Egyptian dresses and books about the ancient Egyptian civilization.

There will be a large parking lot outside the Visitors Center in the outer surroundings of the plateau where the buses bringing the tourists to the area can park.

Once they enter the center and leave it, visitors will also find another parking lot where electric vehicles will give them a guided tour of the plateau. The introduction of electric vehicles to the area aims to protect it from pollution and make the tour easy and enjoyable for visitors who do not want to walk, tourism officials said.

“These vehicles are environmentally friendly,” Mohieeddine said. “They will render the tour very enjoyable for those visiting the pyramids.”

The development of the Giza Plateau will also change some of the old features of the area, including the location of the Sound and Light Show, a stunning nighttime audiovisual show that tells the story of the Sphinx and the Pyramids, which is now located at the Pyramids area itself.

Just outside the Pyramids area horse and camel rides will be offered.

The Egyptian authorities have readily invested over half a billion Egyptian pounds (roughly $31 million), including 150 million pounds (around $9.4 million) before the project’s suspension in 2011, for the development of the Giza Plateau, according to Minister of Tourism and Antiquities Khaled al-Anani.

This is a precious investment at an economically tight time for Cairo that strives to increase revenues from the tourism sector, which in 2018 contributed 11.9% of the national gross domestic product. The sector also employs over 12% of Egypt’s workforce of 29 million people.

The development of the Giza Plateau goes hand in hand with the construction hundreds of meters away from the Grand Egyptian Museum, a gigantic building that will host around 100,000 ancient artifacts.

The museum will replace the Egyptian Museum in downtown Cairo’s iconic Tahrir Square as the largest gathering place for Egypt’s ancient antiquities.

Constructed over almost 500,000 square meters (123 acres), it will give visitors an interactive experience and function as a bridge between life in today’s Cairo and life in the same city thousands of years ago.

The Egyptian authorities will create a pedestrian-only space between the Grand Egyptian Museum and the plateau, a 15-minute stroll that takes visitors into the depths of Egypt’s history, away from the traffic, the noise and the bustle of today’s Cairo.