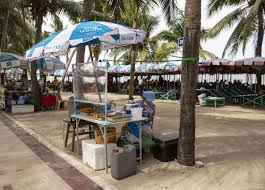 Thailand is cautiously looking at plans to reopen its borders as it struggles to survive an extended period without international visitors, who account for about two-thirds of the country’s tourism income.

“The virus won’t go away soon and we have to think about the economy. But we can’t just reopen the borders. We have to be careful,” Transport Minister Saksiam Chidchob said in an interview. “Thailand has a limited budget so we have to make sure we can control the disease well.”

Thailand may allow some foreign visitors into the country as early as October. Tourists from countries with limited infections will probably be required to wear wristbands with GPS tracking systems and will need to be quarantined in a hotel for the first 14 days, Saksiam said. The plan is likely to be tested in Phuket province, he said.

Thailand’s borders have been closed to most visitors since late March. While there have been several proposals for international travel arrangements, the government keeps adjusting plans to reopen for tourism, which makes up 20% of the economy.

The government has been trying to promote domestic tourism with a campaign to foot 40% of travelers’ hotel bills, but local spending alone can’t compensate for a loss of foreign receipts.

Thailand faces one of the worst outlooks among emerging countries in Asia as the pandemic batters its manufacturing sector and upends international travel, the two pillars of its economy. The Finance Ministry predicts gross domestic product will shrink by 8.5% this year, its worst contraction on record.

While the pandemic wreaks havoc on the economy, Thailand has managed to control the spread of coronavirus, with no locally transmitted cases reported in almost three months. In total, it has had 3,390 cases and 58 deaths.