Bali plans to reopen to international tourists in September. A number of obstacles stand in its way 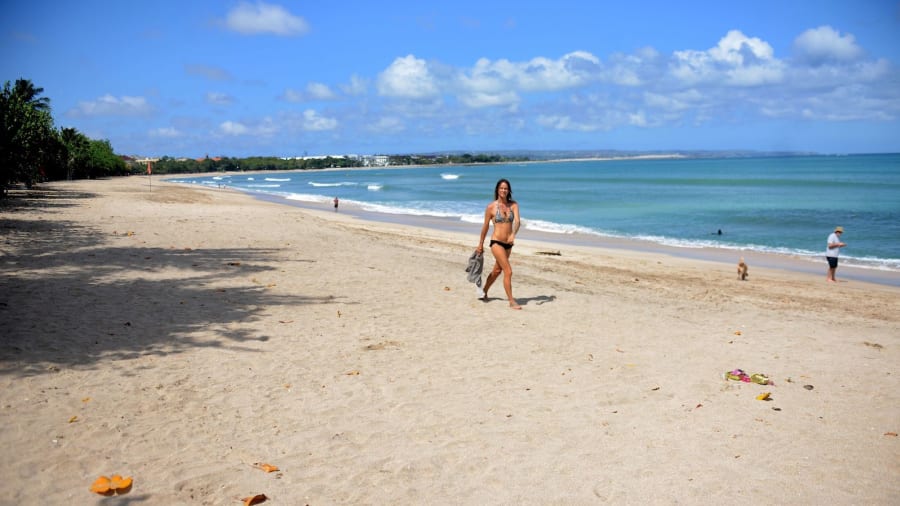 September 11 might be associated with tragedy in US aviation history, but it’s an auspicious day on Bali’s Hindu calendar.That’s why, come 9/11, authorities on this Indonesian island hope to see the return of some of the millions of international visitors who usually flock to its beaches, temples, rice fields and yoga studios. This would allow long-shuttered hotels to reopen while providing desperately needed income for tourism workers — some of whom have earned nothing since February.Tjokorda Oka Artha Ardana Sukawati, Bali’s vice-governor and former chair of the island’s hotel and restaurant association, tells CNN Travel the date remains tentative, but reopening is critical to the island’s economy.”The Covid-19 pandemic is the most devastating disaster for Bali tourism,” he says. “It is much worse than the Bali bombings, both the first and the second, and worse than all the Mount Agung eruptions combined.”Related contentPassports for purchase: How the elite get through a pandemicHotel arrivals in July were down over 99% year on year, Sukawati noted, while the island is missing out on around 9.7 trillion rupiah (over $650 million) of income every month. Tens of thousands of local workers have been officially furloughed, generally without pay. Thousands have lost formal jobs, and many workers in Bali’s large informal tourist economy are desperate.While some Balinese are able to return to their family orchards, rice fields or fishing boats and contemplate rebalancing the economy towards the traditional way of life that sustained the island for centuries, other islanders have, quite literally, nowhere to go.

September 11 might be just a few weeks away, but before international tourists can return in significant numbers, a tricky game of health diplomacy awaits.Few travelers are willing to brave two weeks of quarantine — whether at the beginning or end of their trip — for a short vacation. Meanwhile, most travel and medical insurers will not cover visitors to destinations their government recommends avoiding.And then there’s the fact Australian resident nationals — historically one of Bali’s largest tourist markets — can only leave the country with a permit indicating an urgent need to travel, and that excludes vacations.Internationally, skepticism surrounds Indonesia’s management of Covid-19.Health Minister Terawan Agus Putranto spent much of the early phase of the pandemic hymning the power of prayer; Agriculture Minister Syahrul Yasin Limpo drew mockery after touting a eucalyptus necklace as a miracle cure; while President Joko Widodo (universally known as Jokowi) has admitted to repressing information to avoid panic.Related contentHotel guests checking in for the long haulNational figures show cases rising at around 2,000 per day as of August 18, among a population of over 270 million. But both cases and deaths across Indonesia are likely significantly under-reported say experts. For example, suspected cases who die before receiving a positive test result do not make the official mortality lists.”I think we can be certain that the numbers are an underestimate,” says Panji Hadisoemarto, an epidemiologist at Indonesia’s Padjadjaran University.”We’re not testing enough people and we know for sure that quite a lot of asymptomatic cases or cases with very mild symptoms may go undetected.”He notes that, nationally, almost 13% of tests return a positive result, more than double the World Health Organization’s recommended minimum of 5% and more than 30 times Australia’s rate of 0.4%.Bali’s Ngurah Rai International Airport reopened to domestic flights on July 31, 2020.SONNY TUMBELAKA/AFP/AFP via Getty ImagesCurrently, Bali shows signs of successfully flattening its Covid curve, with under 50 new cases per day for its population of around four million. This is due in part to effective contact tracing at the village level, and isolation capacity in its Covid referral hospitals.Yet the impact of reopening to domestic tourists on July 31, including visitors from regions with much higher infection rates, has yet to appear.”We have seen from experience that reopening tourism destinations usually leads to an increase in the number of cases,” says Hadisoemarto. “There’s always a risk that tourists will bring in Covid-19 to Bali and be a source of transmission within Bali. I wouldn’t be surprised if Bali saw an increase again.”Related contentWhich international destinations are reopening to tourists?But Sukawati notes that many tourist destinations in Bali are in the open air, making social distancing easier, and that the private locations of villas and their generally open design also supports reduced transmission.Nonetheless attempts to establish travel corridors with nations such as Australia, South Korea, and China have yet to bear fruit, given their very different approaches to managing the pandemic.

On a wing and a prayer

lthough airplane travel is back on the rise, some travelers tell CNN why they aren’t getting on a plane anytime soonThe ultimate decision on when international visitors can return to Bali falls to the central government in Jakarta, which dictates when tourist visas (or the visa waiver on which many international visitors enter Bali) can be issued.The coordinating minister for Maritime Affairs and Investment, Luhut Binsar Pandjaitan, has suggested to local media that Indonesia will not open to tourists until at least the end of 2020. CNN Travel reached out to the Ministry of Tourism for comment before publishing.Whether Bali’s reopening date is September 11, December 31, the summer of 2021 — or some point in between — formidable obstacles remain to be addressed.”Even if Bali is open for international tourism, then we’re talking about international travel to Indonesia,” says Hadisoemarto. “So it’s a matter of international trust for reopening flight connections.”Currently, Bali’s Ngurah Rai International Airport offers direct flights to just two international destinations: a patchy, often canceled service to Doha, in Qatar, and a handful of flights to Australia (which is closed for inbound and outbound tourism). Even purchasing a ticket provides absolutely no guarantee that a flight will depart as planned.Jakarta-based aviation expert Gerry Soejatman is skeptical about reported plans to open new, direct routes to France, India and the United States on national carrier Garuda, noting that Indonesia’s flag carrier lacks the right type of aircraft for long-haul flights with low passenger numbers.”Ambitious aspirations are fine, but reality is a different thing altogether,” he says.”In Asia, we’ve survived by being paranoid, so that’s going to be a hurdle for tourism within the region.”Soejatman estimates that it will take just one to three weeks to open up old pre-pandemic flight connections to Bali, but that negotiating and implementing a new international route could take up to three months in the current conditions.And until Indonesia demonstrates control over the pandemic, with case numbers in decline and testing levels that meet international standards, it seems few governments and airlines will be amenable