Watch: How Dubai Airport is ensuring safety and ease of travel in the aftermath of COVID-19 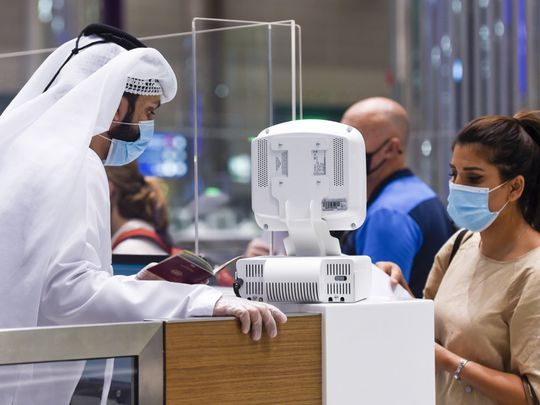 Dubai: Dubai International Airport’s new system to travel through the facility post-pandemic has gained travellers’ trust. The easing of travel restrictions has resulted in more than 20,000 passengers travelling through the airport every day, with the expectation that the airport will return to normality soon.

Strict measures have been implemented at the world’s busiest international airport to ensure passenger safety in the wake of the coronavirus pandemic.

According to the General Directorate of Residency and Foreigners Affairs (GDRFA) in Dubai, by this November, the peak number of travellers passing through the airport will be similar to 2019 figures.

Brigadier Talal Ahmad Al Shanqiti, general director assistant of Ports Affairs at DRFA-Dubai, told Gulf News, that facilitating travel through the airport was essential towards ensuring that the airport returned to normality soon. Passengers can now arrive two to two-and-a-half hours before the flight.

Airport procedures used to take four hours before departure, but the situation is back to normal now.

“Airport procedures used to take four hours before departure, but the situation is back to normal now. Number of travellers has increased from 500 passengers per day during flight restrictions to 20,000 per day by August,” Brig Al Shanqiti told Gulf News in an exclusive interview at the airport.

While the risk of getting infected on an aircraft is typically lower than in a shopping centre or in an office environment, there are simple measures one can follow to further reduce the risk when travelling through airports. Following are excerpts from what Brigadier Al Shanqiti had to share.

Take a taxi, use the Metro or let a friend drop you at the airport as only travellers with valid tickets are allowed to enter the airport premises.

Comply with social distancing norms as leaving a two-metre distance between travellers is a must inside the airport.

After crossing the airport’s main gate, you will see a vending machine selling personal protective equipment (PPE), in case if you have forgotten to bring your mask, gloves or protective kit for travel.

Wearing masks is a must all the times at the airport.

After you are done with PPE, you need to cross the thermal screening gates.

Previous articleTravelling to Thailand not possible this year, as it remains closed for leisure travel until 2021
Next articleEgyptAir operates 38 international flights transferring 4K passengers