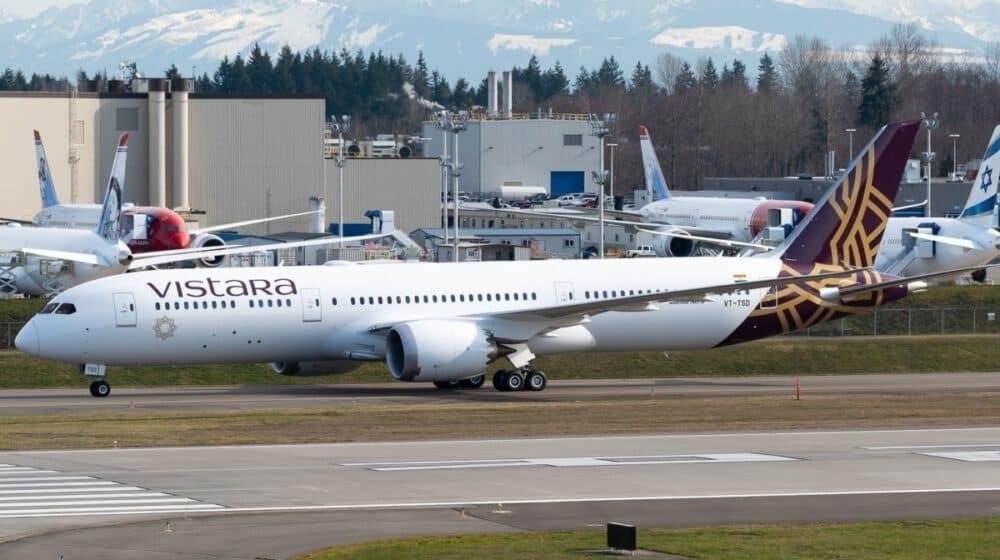 Vistara is set to take delivery of its second Boeing 787 later today. The aircraft left Boeing’s facility in Everett, Washington, at 07:40 local time and is expected to touch down in Delhi in the next few hours. The delivery also coincides with India’s Independence Day, a well-timed move by Vistara.

Vistara’s second 787, registration VT-TSE, has been spotted at Boeing facilities since late March. While originally deliveries for the six 787 were to end by 2021, Vistara is trying to extend this deadline due to the current downturn, only taking delivery of two 787s this year.

Inside the Dreamliner, interiors are likely identical to Vistara’s first one. The plane will feature a three-class configuration, with economy, premium economy, and business class cabins. The business class onboard is similar to Singapore Airlines’ regional 787, making for a comfortable flight.

Europe flights on the horizon

With the delivery of its second 787, Vistara is all set to start flights to Europe. The first three destinations will be London, Paris, and Frankfurt, all major hubs. Flights to London will likely begin first, as early as next week, according to some reports, as Vistara finalizes a slot at Heathrow.

Europe has long been on the radar for Vistara. However, the current situation has delayed plans. Now, thanks to travel bubbles, Vistara can now start international flights to the UK, France, and Germany.Advertisement:

However, competition should be expected on Vistara’s London route. British Airways and Virgin Atlantic are both flying to India, and SpiceJet has also been awarded a slot at Heathrow. While pent-up demand is present for now, we could see airlines battling for market share in the future.

Yesterday, the Tata Group formally announced that it is planning to bid for Air India, after months of speculation. Tata currently owns 51% of Vistara and AirAsia India, which means a potential takeover of Air India could see these airlines merged.

An Air India-Vistara merger would be a major shakeup for the aviation industry, setting up a new giant in the region. India has also long needed a new international carrier to serve the massive demand from the country. While it is still a bit early to start planning their new livery, we could see a new carrier very soon.Advertisement:

For now, Vistara is looking ready to fly its first long-haul routes. The second 787 will allow the carrier to build a strong flight network and connect passengers within India to foreign destinations.

Previous articleQatar Airways US Flights: The Airbus A350 Is Perfect
Next articleTourism Authority of Thailand launches ecotourism campaign on social media